Things are changing at DC. Again. One of my problems with DC is their continual reboots, which for the most part only make continuity more complicated. 2011's New 52 movement, thankfully, was a cleaner break than most, tweaking characters and storylines that in many cases worked well in their new guise (although not all). Now, though, DC are at it again, with their Convergence event; not a reboot, but a major shake-up, changing the situations the key characters find themselves in and posing new challenges. Post-Convergence, the main lines have settled and we have the first indications of their new direction.

It's no secret I'm a Marvel man, but the core DC heroes are irresistible. Some of the the changes coming up might be little more than costume tweaks, but the central duo, Batman and Superman, have truly been shaken up. I picked up this week's Batman/Superman as the quickest way to check the new look out, and enjoyed it so much I went and downloaded both characters' solo titles for the month as well (Batman came out this week too, Action Comics arrived last week).

To summarise: Bruce Wayne is dead (supposedly). There's a new Batman in Gotham. Superman has been drastically de-powered, and his identity is known. Things are not as they should be. 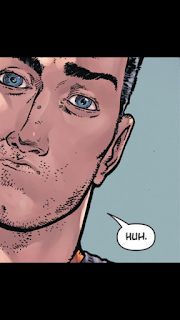 I love what they've done with Superman. One of the big problems with Superman has been his gradual increase in power over the years, to absolutely ludicrous levels (the movies are perhaps the worst offenders here). There have been several attempts to downgrade his abilities, alter them or take him out of the picture, but this one really works for me. He's still astonishingly strong, but no longer so absurdly powerful that he can knock a moon out of orbit or punch a hole in space-time. He can jump pretty damned far, but no longer leap tall buildings in a single bound, let alone fly. He needs to eat, he gets tired and feels the cold. He's been locked out of the Fortress of Solitude and even his costume has been shredded.

Superman been humanised, and it's a fantastic move. For the first time in ages, he feels like Clark Kent, a man, doing the right thing despite the fact he might pay the price. It's made all the more compelling by the outing of his identity. Luthor can't bring himself to believe it, and suspects it's all a trick. Meanwhile, the police want him for his part in the endangerment of Metropolitan citizens, and those citizens themselves have turned against him, in a wave of xenophobia against the alien interloper. All of a sudden, it seems the whole of Metropolis thinks like Luthor. He doesn't even have Lois to turn to. And yet, there are those who remain loyal to him. There's a wonderful scene where he returns to his old neighbourhood, to be greeted by an overwhelming show of support, from people who remember the good he has done and are proud to have known Superman. He keeps fighting, even as he bleeds and bruises, because he owes these people. It's a great reaffirmation of the character. 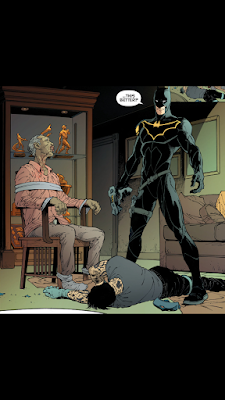 I'm less certain of the new direction of Batman. It's very clear that Bruce Wayne will be back, and the writers aren't even playing coy about it. For now, though, Jim Gordon is Batman, an unexpected development but one that is, in the circumstances, quite logical. Part of Batman's central conflict is his position outside the law, and the reversal of this - a police operated Batman - is a strange but understandable about-face. In that set-up, there's no one it could be but Jim Gordon. The much-mocked robo-flopsy armour works much better in context, but its ridiculous looks don't escape a jab or two in the script. Thankfully, it's not the only new Batsuit available. The final pages reveal another look which works perfectly.

I'm still not quite sold on the new direction for Batman, but one thing it has done is totally shake up the relationship between the two heroes and their titles. With all the Batman vs. Superman hype, it's easy to forget that Clark and Bruce are firm friends and allies. Clark no longer has Bruce to back him up, and it makes his situation all the more vulnerable. It's also a fascinating reversal; Batman working within the law, Superman hunted by them. I'm really interested to see where this goes.
Posted by Daniel Tessier at 11:16