A slacker human, an anthropomorphised cat, a robot designed for cleaning - add a neurotic hologram and Space Dandy would practically be Red Dwarf. This time, they even end up on a garbage planet with a link to Earth. Has someone been reading Better Than Life?

He's Dandy, Baby: Dandy makes way to an uncharted planet in search of unregistered aliens, but all he finds is a single, lonely dog. Initially he believes her to be an alien who just looks like a dog, but he doesn't stick to that hypothesis for long. He bonds with the dog quickly, and names her PUP - short for Precious Upsidedown-coconut Pie, inspired by an item on the BooBies menu. All Dandy really needs to make his life that bit more worthwhile is a dog. He's pretty harsh on Meow here, even before he starts hating on PUP, and doesn't care much for the Betelguesian's feelings when he immediately invites the dog to join the Aloha Oe crew. Sadly, PUP is dying, and Dandy is genuinely heartbroken when she goes. He uses the robotic version of the Little Aloha (seen back in episode four) to build a "rocket coffin" for the dog, to launch her back into space.

He's Not a Space Cat, Baby: He's a big licker. He initially takes against PUP, but secretly becomes very fond of her, and is upset when she dies. Meow actually speaks dog, and while he tries to use this to badmouth the pooch (it doesn't work, because Dandy's universal translator manages to unpick the doggie dialect), he's taken by her because she likes his hat. As a furry creature, Meow becomes the host for the two alien parasites that have been living on PUP all this time, which leads them onto the Aloha Oe. Meow actually discovers an unknown alien species on the planet, but accidentally eats it before he can help himself. He has a free unrecorded alien app on his phone, which leads them to the junk planet. 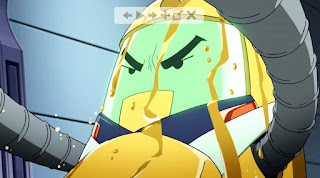 He's Just a Little Obsolete, Baby: His historical records aren't exactly accurate; he identifies PUP as belonging to a breed of dog called a Laika. Which is partway to the truth, of course. Being a machine, QT is susceptible to the Machinians' influence, and is possessed by the vengeful last surviving creature. He's excited - even aroused - by the heaps of space junk that make up the surface of the planet.

The Machinians: Tiny, almost microscopic creatures who live like fleas on the backs of hairy creatures. They are micro-humanoids with human heads and flexible, springy skeletons. QT's database identifies them as a Graviton and a Gravitino (actually hypothetical boson particles in the real world), beings long thought extinct who have the ability to manipulate machines and bring metal devices together under gravity. The Machinians are depicted in pretty racist Native American cliches, going on about their sacred land and so forth. The Le Flea brothers have been living on PUP's back and are probably the last surviving members of their species. One suffers death by comb on Dandy's pompadour while the other is stepped on. Goodbye reward money.

The blue mold: Some kind of alien organism that is discovered by Meow inside an old fridge on the junk planet. This, in fact, marks the episode out as a direct sequel to the Cowboy Bebop episode "Toys in the Attic," an Alien pastiche in which the same fungoid alien attempts to infect the characters before being launched into dead space in the fridge. Presumably, the fridge drifted in space for thousands of years before being absorbed into the junk planet... proving once and for all this is the same universe as Cowboy Bebop.

I Know This Planet, Baby: The planet Machinia, on which the episode is set, is comprised entirely from old space junk, bits of satellites and old appliances and so forth. Drawn together under gravity and the influence of the Machinians. Only the Machinians' power is keeping it stable, and once they are dead, the planet collapses under its own gravitational force into a black hole. It is (was) located in an "Andromeda-like galaxy."

It's Future History, Baby: So, PUP is Laika. Even without the Narrator spelling it out, of course she's Laika. Launched into space by the Soviet space programme and recorded as dying on reentry, Laika was the first terrestrial animal ever to leave the Earth. In Dandy's universe, she drifted aboard Sputnik 2 until she, somehow, arrived on the junk planet in a distant galaxy. Presumably she drifted through a wormhole or something to explain how she is still alive so far from her home time and space, or maybe she was flung out at relativistic speeds... whatever, it's Laika, she was abandoned and alone and died for our science.

There's Bad Guys Too, Baby: Bea has upgraded the Gel's music system (it plays the BooBies music!) but it has the side effect of launching the ship's missiles. Dr. Gel doesn't like this because Admiral Perry is a cheapskate and keeps complaining about interplanetary damage claims. Dr. Gel and Bea are back on the trail of Dandy, but are killed when they're sucked into the black hole while the Aloha Oe warps to safety. Dr. Gel does get to do the "next episode" voiceover, where he bitches about continually getting killed off and missing episodes.

Don't Quote Me, Baby: "Say what you will about me, I can always spot a bitch." 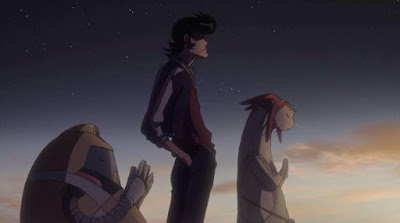 The Bottom Line, Baby: A moment of silence for Laika, please. God, this episode is a gutpunch. Even the Narrator blubs. It's weirdly structured, though; the first half builds to a heartbreaking ending, then it carries on with over-the-top alien shenanigans. Still, this is a desperately sad episode. Indeed, it's the second most upsetting animated science fiction dog-related episode in history (the most upsetting being Futurama's "Jurassic Bark," which I cannot watch).


Season One, Episode Nine - Plants are Living Things Too, Baby

Searching for the mysterious and valuable alien known as "Code D," Dandy and Meow arrive on separate hemispheres of the planet Planta.

I Know This Planet, Baby: The planet Planta, the pinnacle of Space Dandy's ingenious naming techniques, is, at the beginning of the episode, a colourful planet, one hemisphere of which is covered in vast biodomes. Its entire ecosystem is plant-based, and there are apparently no animals there at all (although we do see a caterpillar-like creature at one point). There are fourteen plant-republics in existence on the planet. By the end of the episode, the planet's surface has reverted to red savannah. Life on the planet had been drastically altered by the presence of Code D - in reality, a meteorite with strange radiant properties.

Vegims: the dominant species of the northern hemisphere of Planta, the Vegims are highly intelligent and display varied personalities. They have domesticated a population of "microbes" for their own use. Notable members of the species include the scientist Dr. H. and his offspring, the seed-like 033H, who befriends Dandy. Dr. H. works for the leader of the Vegims, the tyrannical Cocomuka.

Movies: the quiet, panda-coloured inhabitants of the southern hemisphere, the Movies are inscrutable and spend their time growing bean-like foodstuff. They feed this to Meow, in order to fatten him so that they can add him to their menu. 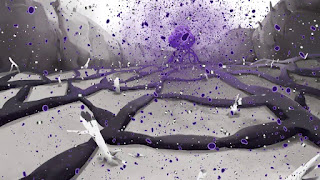 Microbes: not microbes at all, being that they are quite gigantic, the "microbes" are emitted by Code D as part of its symbiosis with the planet. Their interaction with the native plants has resulted in their hyper-evolution into intelligent beings.

He's Dandy, Baby: Dandy becomes good friends with the enthusiastic 033H, showing again his surprisingly good way with children. On a quest to find Code D, he is persuaded by Dr. H. to destroy the meteorite, which leads to the immediate degeneration of both the Vegims and Movies into ordinary, sessile plants. Dandy is clearly affected by this but tries, unconvincingly, to shrug it off. It's a pretty tough couple of episodes for him, in all fairness.

He's Not a Space Cat, Baby: Believing the Movies to be wonderful hosts, Meow continually eats the beans until he quite disgustingly obese.

He's Just a Little Obsolete, Baby: Yeah, QT doesn't do a lot this episode. He has (sort of) fixed the teleporter, though.

The Bottom Line, Baby: A hard episode to review, on account of its being so opaque. This is golden-age style science fiction, with a strong central conceit, a race of plant people uplifted to sentience and a noble scientist who wants nothing more than to return to innocence. There are some astounding visuals, too. On the other hand, it's deeply strange and easily the least funny, or even entertaining, episode of Space Dandy, and it's hard to get very excited about it.
Posted by Daniel Tessier at 17:11