It's the Groundhog Day episode, and our first look at Meow's home planet, Betelguese, where Dandy and co. are forced to make a landing in order to get the Aloha Oe serviced. It should only take a couple of days...

He's Not a Space Cat, Baby: Meow's not keen on going back to Betelgeuse, but at the end of the day (a very long day), he's glad he goes home. His family are thrilled to see him, from Li'l Mamma to his dad, who is in fact very proud of his son, in spite of his not following him into the family business (making parts for an unknown appliance at Screw Industry). When he's not chasing rare aliens, he's playing Galaga. He had an old sweetheart named Katie, who now works at the bar his dad drinks at after work; sadly for Meow, Katie is gay. Despite all his protestations to Dandy, most everyone calls him Meow (or Mew), not Mrrwmewmew. When Meow finally cottons on to the fact that he and everyone is living the same day over and over, his immediate conclusion is that they've all developed superpowers.

He's Dandy, Baby: Totally bonds with Meow's dad over their shared love of boobs. Dandy has trouble believing that they're caught in a timeloop, and just thinks that life on Betelgeuse is so incredibly boring that it just feels like the same day over and over. Even when he is convinced, he doesn't really care until it's pointed out to him that the Aloha Oe will never get fixed and therefore he'll never get to BooBies. He tries to steal a spacecar but it explodes, killing him - until the day starts over again.

He's Just a Little Obsolete, Baby: It's QT who first notices the day has been repeating itself - after 88 iterations. Dandy's complete nonchalance means no one pays it any mind until the 100th iteration. 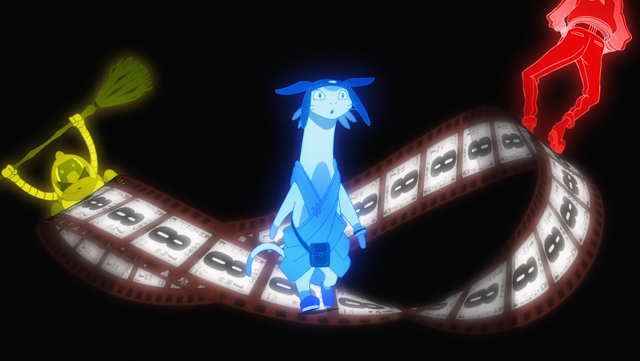 There's Bad Guys Too, Baby: The Gogol and Jaicro Empires are still at war, battling for control of the universe. Both sides have potentially monstrously destructive weapons of war. The Jaicro have huge Gundam/Ideon style mechas for battling in space, while the Gogol have the CORE - an unstable weapon that requires the rare element Pyonium to function. When Admiral Perry orders Dr. Gel to activate the CORE without the requisite levels of Pyonium, it explodes, sending a discharge of pure Pyonic energy through space.

Phenomenology, Baby: The Pyonium energy travels to Betelgeuse and hits the calendar in Meow's family's house, twisted space-time into a Moebius loop and forcing everyone to repeat the day over and over. The effect is only stopped once Meow's dad uses his metalworking skills to cut the affected page from the calendar.

I Know This Planet, Baby: In real life, Betelgeuse is, of course, a star. Also called Alpha Orionis, it's a red giant lying approximately 700 light years away (assuming it hasn't already collapsed). In Dandy's universe, however, it is the name of a small blue planet, in close orbit with a much larger red planet, which hangs heavy in its sky. Much of the surface is water, and the region we see is experiencing a temperate summer. So not unlike Earth, really. The native Betelgeusians are catlike creatures, although the females tend to wear wigs and make-up that make them look more human-like (which is actually a little disturbing). The area we see looks very much like rural Japan with a touch of downtown Tokyo.

The Bottom Line, Baby: A great episode. Meow finally gets some much needed focus (QT will get his turn soon), and learns that sometimes, you have to go home in order to start afresh. It's a fine character piece and a great bit of sci-fi. Obviously, Groundhog Day is the immediate point of comparison, but it has more in common with the Star Trek: The Next Generation episode "Cause and Effect." In any case, time loop episodes are ten-a-penny in science fiction, but rarely are they done with as much humour and heart as this.

I Know This Planet, Baby: Lagado (or Ragado), the Great Library Planet: Its surface is entirely covered by libraries, the greatest collection of literature and knowledge in the entire universe. From orbit, the planet appears covered in a complex series of circular symbols, not unlike the Gallifreyan writing in Doctor Who. In fact, the setting is very much like the Library Planet in the episodes "Silence in the Library" and "The Forest of the Dead."

Alethia: Described as both a book-type and a parasite-type alien, Alethia appears as a plain, white paperback book entitled Secrets of the Cosmos for Dummies. Parasite-types have no nervous system of their own, and instead utilise the brains of others to process information, erasing their memories when done. She is also able to feed on the data gained from her partners' memories. Alethia is also the Great Librarian of Lagado, although she is personified as a little girl. All she really wants to do is get out there and explore the universe, although she also needs to generate data to feed on. To that end, she seemingly influenced Dr. Gel into getting Admiral Perry to check her out of the Library, and then got Dandy and co. to steal her back, before spending six months travelling with them. None of which they can remember.

Librarians: the staff/inhabitants of the Library of Lagado are mono-optic crystalline beings that carry spears in their single arms. They're terribly polite, though. They've been harassing Admiral Perry regarding his overdue books - in actuality, their Great Librarian. 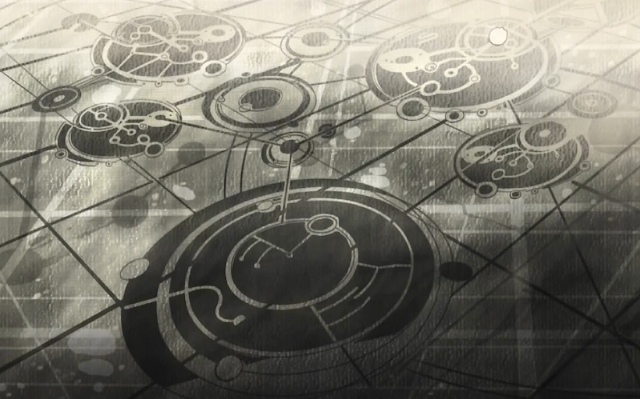 He's Dandy, Baby: Dandy tries to register an unknown alien with Scarlet at the ARC, with only the vague knowledge that it cannot be let out of its box before the time is right, or all their memories of it will be erased. Over the course of the episode, we come to understand Dandy's role in rescuing and eventually returning Alethia to Lagado. He's tempted back there by the promise of an all-you-can-eat, all-you-can-drink free trip (he doesn't care about the all-you-can-read part of the deal). He isn't afraid to go up against the entire Gogol space fleet in his one little ship (possibly he subconsciously recalls that the beings of Lagado will protect him while he is in possession of Alethia).

He's Not a Space Cat, Baby: He understands Alethia's desire to see the universe and never give up. He's a dreamer, just like her, although in reality she actually got out there and lived her dreams, while he prefers to stay on the ship fantasising.

He's Just a Little Obsolete, Baby: First uncomfortable hints at QT's disdain for biological life forms. He eats data; the better organised it is, the tastier it seems to his operating system. He becomes quite hysterical while devouring books in the library - for him, the all-you-can-eat part and all-you-can-read part are the same thing. QT's is so out-of-date he needs and update just to perform his updates.

Let's Get Our Asses to BooBies, Baby: Honey hints at her hidden depths when she reveals that she not only knows all about the planet Lagado, but that she can read the ancient and unknown language that the mysterious book is written in.

There's Bad Guys Too, Baby: Dr. Gel is, for all his idiocy, a mathematical and scientific genius. He is ensconced in his calculations throughout the episode - time/space equations hinting at the true nature of the universe, and the secret of the tremendous energies of Pyonium. He's been manipulated into solving these equations by Alethia, so she can use his brains to generate the data. Meanwhile, Admiral Perry is sick of being hassled by the Librarians, and has decided that conquering the planet is less bother than paying the fine. He gives Bea command of the mission while Dr. Gel is indisposed. Eventually, Gel solves the equations, but the ultimate knowledge has a price, and the ship destructs, taking him and Bea with it.

The Bottom Line, Baby: A confusing, talky episode, but packed with fascinating ideas. The visuals are becoming more interesting as the series progresses, and there's an almost occult look to parts of the episode. One of the more esoteric instalments.