Nostalgia may rose-tint our spectacles, but it also increases their focus. I was nine when Jurassic Park was released in 1993; I saw it on release and firmly believe it to be an absolutely classic film. Naturally, I was tremendously excited to finally get to see a fourth instalment in a franchise I have followed from the beginning (movies, original novels, junior novelisations, toys, games and all). However, Jurassic World had a hell of a lot to live up to. 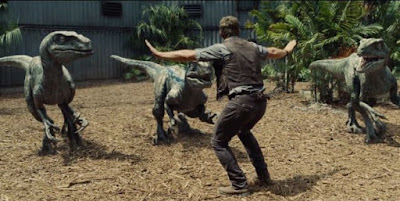 There are clear weaknesses in the finished film, even after a decade of script revisions in development hell. The characters are walking clichés, and while the Jurassic Park cast were hardly given the most original characters to work with, they at least felt rounded, and at the time, reasonably new. The rock and roll mathematician and teenage hacker are cheesy as hell now, but in fairness, it was the Nineties. Jurassic World gives us a man's man gamekeeper, and an ice queen career woman who just needs a real man to break down her walls. I have to agree with Joss Whedon's comments regarding the sexual politics of the film; this was par for the course in the Seventies.

But then, I'm not going to see a Jurassic Park film for high art. This is a monster movie, and a very good one. I'm on the fence regarding the inclusion of the genetically hybridised dinosaur, Indominus rex. On the one hand, I agree with Chris Pratt's character, Owen: dinosaurs are “wow enough.” Actual dinosaurs are incredible, there's no need to make up new ones. Yet, it's hard to argue that this allows some spectacular set pieces and pushes the plot into interesting territory. It's hard to swallow a dinosaur intelligent enough to trick the keepers into letting him out, let alone one that virtually has the power of invisibility. The Indominus is an absurdly pimped up beast, from her quills to her gnarly teeth, but as producer Colin Trevorrow has said, this isn't a documentary. It's a sci-fi monster movie. Also, it's not like the rest of the dinosaurs are scientifically accurate, and although I'd rather see feathery Velociraptors charging about, the creatures here all look fantastic. And I do appreciate a brief line from Dr. Wu (BD Wong, the only actor from the first film to return), pointing out that all the dinosaurs are hybrids to a degree, and would have looked quite different in nature.

Jurassic World is an allegory for corporate excess and the commodification of natural resources. This is, to be fair, hard to accept coming from a Hollywood blockbuster with a budget of $180 million. The Indominus was created to tempt moviegoers who have been spoiled by a slew of big budget sci-fi action movies, just as it was created in universe to keep happy the tourists who have become bored with ordinary dinosaurs. Nonetheless, it makes its point, and a subplot regarding the weaponisation of dinosaurs – something that earlier treatments of the film were said to focus on – provides a strong thread, as well as clearly setting up the direction for a fifth film. The movie's plot is completely predictable, every beat signposted, even the final fate of the mighty Indominus obvious almost from the outset. However, sometimes a little predictability works in a story's favour. This is a movie where you just need to sit back and wallow in the spectacle, and spectacular it is. It's a CGI overload, of course, and will age far quicker than the original, which still stands up extremely well today; although it's good to see that puppetry still has a place for scenes of physical interaction. 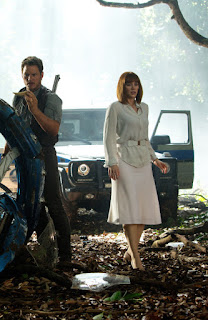 Pratt is as charismatic as ever as gamekeeper and raptor trainer Owen Grady, even if the role does sometimes come across as an extended audition for Indiana Jones. Bryce Dallas Howard is pretty perfect in the role of Claire Dearing, the park's operations manager. She's fundamentally unlikeable to begin with, until Pratt's character melts her heart and breaks through to the real woman within. Every independent woman just needs a bit of rough with a big weapon, right? Her two nephews, played by Nick Robinson and Ty Simpkins, are both great, although it might have been fun to make the older brother the enthusiastic dinosaur fan and the youngster the disdainful one who needs to be amazed. Vincent D'onofrio does what he does best – the charismatic villain, in this case, the security chief and champion of weaponisation. Smaller roles for Omar Sy, Irrfan Khan, Jake Johnson, Lauren Lapkus and Katie McGrath are all essential, and the entire cast acquit themselves well. Plus, there's a couple of fun little cameos to watch out for, although some kind of inclusion of the late Richard Attenborough would have been welcome.


At the end of the day, though, it's the dinosaurs who are the stars. The Velociraptors, always the heart of the series, have not lost the development they received in Jurassic Park III, and the four trained raptors have plenty of personality, especially the beta, Blue, with her special relationship with Owen. There are some thrilling moments with the tank-like Ankylosaurus, a huge flock of pterosaurs, and the new addition, the sea lizard Mosasaurus. The dino petting zoo is the cutest. The best moments, though, are reserved for everyone's favourite, the T. rex herself. Although it isn't mentioned in the final film, this is intended to be the original T. rex from Jurassic Park, twenty-five years old and not about to let the Indominus usurp her as queen of the park. (And for everyone who complains that no zoo would keep a known man-eater as an attraction, I can tell you from experience that you are wrong.) For all the mediocre writing, throwback sexism and unoriginal characters, this is simply great fun. Any film that end with the biggest and best dino-on-dino fight ever committed to screen is going to leave me satisfied.