Next, in my overdue review catch-up: an audiobook and audioplay from the wonderful, whimsical Paul Magrs, one from Big Finish and one from the Beeb. 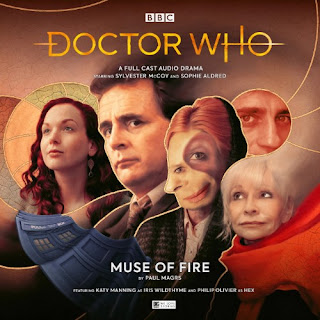 First is the long-awaited reunion between the Doctor and Iris Wildthyme. Part of the Big Finish main range - a very occasional pick for me these days - this came out at the very end of last year. Muse of Fire sees the transtemporal adventuress meet the seventh Doctor at last, something which I've been waiting to hear ever since she bitched about the portentous little sod back in her first full length Doctor Who appearance, the 1998 novel The Scarlet Empress. We don't get very many Iris audios these days, and she hasn't been in a Doctor Who one for an age, so this was one to look forward to.

Muse of Fire sees both Iris and the Doctor arrive in 1920s Paris. Beautifully recreated with some excellent scene-setting from Magrs and very effective sound design by Benji Clifford, this is the perfect setting for Iris. It's a time of parties, sophisticated drinking, socialites and artists of all stripes. It's the latter which drives the plot, as it becomes apparent that someone or something is pushing the greatest, most important upcoming artists of the time away from Paris. Magrs displays his marvellous imagination in a story that includes a truly bizarre alien being that fits the themes and settings of the story perfectly. Katy Manning is as adorable as ever as Iris, especially when she is partnered with Philip Olivier's Hex, a rarely used companion these days. The team of Seven, Ace and Hex is one of the best in the audios, but it's Hex's enamoured friendship with Iris which works best.

For his part, the Doctor often takes a dim view of Iris's involvement with history, but he is particularly belligerent and judgmental here. It's good to see this most all-knowing and inscrutable of Doctors taken down a peg or two when he realises that he hasn't made the right call this time. However, the biggest treat of all is Iris's own companion, David Benson's Panda, fulfilling his life's dream as an influential art critic and finally appearing in a Doctor Who story. Panda is such a wonderfully silly idea for a character - a walking, talking stuffed animal with the voice and manners of an inebriated Noel Coward - that his adventures with Iris seemed destined to be consigned to some parallel universe, away from the main Doctor Who narrative. Finally, he meets the Doctor, who even provide an origin story for the little chap, although, as with Iris's various origins, you'd best not take it as the gospel truth.

Muse of Fire is a joy throughout, mixing humour and drama as only Magrs can, although a mark off for not calling it "Destiny of the Dali." 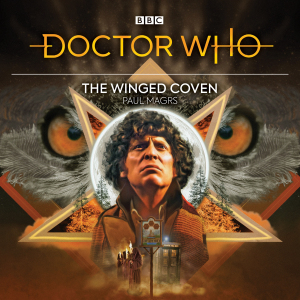 Sadly, Big Finish are apparently not interested in further scripts from Magrs, a foolish decision since his unique voice is a breath of fresh air amongst the same tiny stable of regular writers they rely on these days. Indeed, if it wasn't for his scripts for the BBC's Nest Cottage series, Tom Baker would never have become enamoured with Doctor Who on audio and never have joined Big Finish after years of asking. However, BF's loss is the Beeb's gain, since the month gone saw the release of The Winged Coven, the latest audiobook in the linked Nest Cottage series of adventures, which began with Hornet's Nest back in 2009. Magrs tells the story of writing for and meeting Tom Baker here, and it's clear he enjoys writing these stories as much as I enjoy listening to them.

The Winged Coven is the second audio to be read by Susan Jameson in character as Mrs Wibbsey, the Doctor's housekeeper and occasional companion in this strange and special sideline of adventures. It's an odd little corner of the Whoniverse and one to cherish, where a seemingly older version of the fourth Doctor (the Curator, perhaps?) lives in a house in Sussex, when he's not off on his adventures. Magrs gas always had a thing for middle-aged ladies and their eccentric, parochial view of the world, and the fun that can be had juxtaposing this with the fantastic and cosmic. Jameson's conversational delivery is perfect for this gossipy story of witches and aliens, where she has to contend with a secret society, a to-do in the minimart and the usual difficulties with Deidre Whatsit. It's less a Doctor Who story, really, than a Wibbsey adventures, and I'm fine with that. The perfect listening for a cosy night in.
Posted by Daniel Tessier at 14:13