Who Novelisation Quest 6: "Revelation of the Daleks"" by Eric Saward 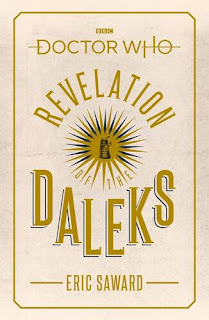 Revelation of the Daleks is the last of the original Doctor Who serials to be novelised. It only took fifty-five years. There seems to have been some ongoing disagreement between Eric Saward, the Nation estate, and various publishers, but eventually it was worked out, and Saward returned to novelise his two 1980s Dalek stories. Resurrection of the Daleks remains one of my least favourite Doctor Who serials, and by all accounts the novelisation is terrible, but Revelation is something else. I've long thought it one of the strangest, most unique and disturbing Doctor Who serials, with Saward dumping his usual action-adventure approach for something deeply seedy and weird.

It's no secret that Revelation of the Daleks was based heavily on Evelyn Waugh's 1948 novel The Loved One, his satirical work based in a funeral parlour. He called it his "humiliating success in the USA," annoyed that it was popular with the sorts of people he was mocking. god only knows what he'd made of it being twisted into a Doctor Who story.

It was always an oddity of Doctor Who. Saward seems to have little interest in writing for the Doctor, instead spending time on the various grotesques who populate Tranquil Repose on the planet Necros. This actually works very well for the story, with the Doctor and Peri only slowly making their way into the main plot, where they are present for the final climax. The Doctor has little to do with Davros's eventual defeat, but the story doesn't suffer for it. Not every Doctor Who story could work like this, but as an oddity it's rather special.

Saward takes the opportunity, as most writers would, to expand the background and settings of the characters and story.Most of the characters get full names and some background, and Saward is clearly having fun inventing a storied future full of peculiar lives. Takis and Lilt, the two heavies who patrol Tranquil Repose's dank corridors, met in battle in the Peninsular Wars on Planet JJ33, where they entertained the troops impersonating Laurel and Hardy. The DJ is really called Derek Johnson, and was dumped on a isolated planet when the space pirates who kidnapped him got sick of his music. The Doctor and Peri get more exploration, too - apparently Peri's accent marks her out as a New Yorker, which is at odds with her usual background as a Marylander and whatever Nicola Bryant was aiming for with that accent - but Saward is clearly interested most in his own characters.

The prose version of the story is, somehow, even more violent and gruesome than the TV serial, and it was already one of the most outlandishly unpleasant stories in the whole of Doctor Who. It's a unique Doctor Who story that benefits from Saward's rather purple prose. Along with Resurrection of the Daleks, it will be reprinted as part of the revived Target Books line this year.

Data:
First published by BBC Books in 2019
Based on Revelation of the Daleks, first broadcast in 1985
Audiobook read by Terry Molloy, with Dalek voices by Nicholas Briggs
Posted by Daniel Tessier at 16:38