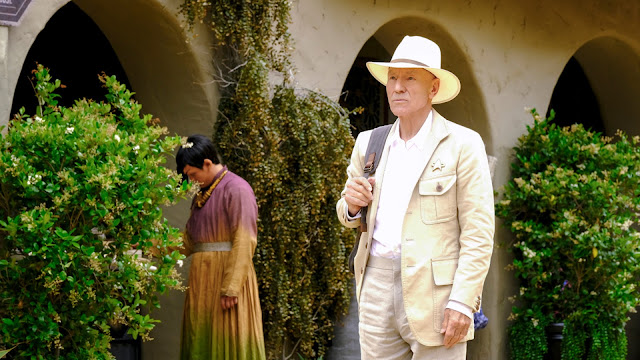 After all these years, are we still pretending that Jean-Luc Picard is actually French? Because he is every inch the Englishman abroad in this episode, striding into the relocation camp on Vashti in the prologue flashback in his white suit and broad-brimmed hat. He's got a serious case of white saviour complex in this episode, and in fairness, he has saved a lot of people, but Christ, does he know it.

While the long pilot ostensibly finished last episode, this instalment is another step in the building of the main cast, with Evan Evagora joining as the Romulan space ninja Elnor. He's basically an elf from The Lord of the Rings, isn't he? Evagora does pretty well as a stoic warrior boy from an advanced martial culture, although the Australian accent is slightly odd coming from a Romulan. Then again, in this series we've had English and Irish Romulans, so why not? Why should all the aliens sound American? I want a Brummie Klingon before the season's out, please.

We learn a lot about Romulan culture in this episode, both on Vashti and on the Artefact. We've never really seen much of it beyond the military, the government and Tal Shiar before, so having new elements to explore sets this series apart from earlier Romulan stories. The Qowat Milat are good fun – a group of warrior nuns with a vow of truth and honesty is just a great fantasy idea and nothing like what we've seen from the Romulans before. Elnor must have had one hell of a childhood, though, with all those women being relentlessly honest with him. I can't help but agree with Jurati – the “way of absolute candor” sounds pretty irritating.

Vashti itself is an interesting location. It seems that it was previously a Romulan/Federation cooperative, which is something that could never have existed in the pre-Nemesis period of the 24th century, and it makes sense that this was a prime location for settling Romulan refugees. It's deteriorated since then, though, and the “Romulans Only” signs seem almost redundant as it looks like all non-Romulan elements have long since pulled out. Some commenters are questioning how poverty can exist in this beautiful future, but frankly, it's pretty clear that neither the Federation for what remains of the Romulan government has the resources to support every planet that needs help. Calling the UFP a post-scarcity society isn't really accurate, but it's certainly on its way to being one, but any society would need a huge infrastructure to keep things functioning. A major crisis – the destruction of Romulus or the attack on Mars – would lead to a huge change in both the availability and distribution of resources. If a colony was let go it would break down very quickly.

It's understandable that there's some bad blood towards the Federation from Romulan refugees, but the characters we meet here are particularly hate-fuelled. The big guy who stands up to Picard seems more pissed off that the Federation offered to help the Romulans in the first place rather than leave them to help themselves. It's a wildly inconsistent attitude, and while that's hardly unusual for someone with a bigoted point of view, it's annoying to see Picard shoulder the blame for that too. Frankly, even together it would have been impossible for the Empire and the Federation to save everyone on Romulus and Remus, but at least Picard's efforts helped save thousands. White saviour complex it might be, but it's gratifying that he'll take none of that shit from the Romulan survivors. He's guilty for not doing more, but he'll never apologise for trying.

Events on the Artefact stretch on, and to be honest they're becoming a little boring. The Incest Twins are becoming irritating in the extreme, and Soji isn't really being afforded much in the way of character. Dajh made more of an impression in her short screen time than her sister has in four episodes, and given that they're played by the same actress, it can only be the writing that's at fault there. It's interesting to learn more about Ramdha, and her insights into Romulan mythology, although the intention seems to be that she is somehow linking Soji with an impending apocalypse. Given that Romulus has been annihilated, you'd think that Romulan Armageddon has rather been and gone.

It's a mostly enjoyable episode, but one whose runtime is overshadowed by its final moments. The La Sirena crew spend a bit too much effort pushing that the pilot of the ship that has saved them from the Bird-of-Prey is a “he,” so it's pretty clear we're going to have the shock reveal they're a woman. Still, it's an effective cliffhanger, even if the reveal does swamp the rest of the episode. But who cares? Seven of Nine's back.

Thoughts: I like that we're explicitly spending some time in the Beta Quadrant, which has been skirted over in most series, even though logically loads of episodes before have to have taken place there, most of Enterprise and Discovery take place there and the USS Voyager, notoriously, should have reached it long before the series ended.

It makes sense that there's a power vacuum since Romulus was destroyed. So far we know that there's a Romulan Free State, possibly residual Romulan Empire, the mysterious Fenris Rangers and sundry petty warlords.

Random thought: what's the status of Nimbus 3 in this period? I can imagine that a lot of Romulan refugees would have made their way there, assuming it's still in neutral territory.

It's a Romulan Bird-of-Prey! Absolute classic starship, how dare Rios insult it?

With Orla Brady, Michelle Hurd and now Jeri Ryan, this series is full of sexy older women. Basically, I want a Trek version of Ocean's 8. (Ooh, my fanfic senses are tingling.)