2.05) The Apple
or
Captain Kirk vs. Another Computer

The Mission: Investigate the unusual readings on an inhabited planet (there's a definite undertone suggesting that the Federation is looking at colonising it).

Planets visited: Gamma Trianguli 6, an incredibly lush planet with an impossibly steady temperature throughout. It has exploding rocks and flowers that short deadly poison darts with a funny 'boing!' noise.

Stellar Cartography: Gamma Trianguli is a young, hot star 112 light years from Earth, and is very unlikely to have any inhabitable planets. Maybe whoever built Vaal built the whole planet?

Captain James T: He tells Chekov off for flirting, the hypocrite. He is more upset than usual by Mallory's death, having known his father. We see an unusually self-recriminatory Kirk, balming himself for taking risks on the planet. Kirk destroys Vaal in order to let the Enterprise escape, returning the aliens to a natural way of life, and decides to take his chances with Starfleet after he breaks the Prime Directive. Then again, it's certainly an argument that four hundred crewmen outweigh a dozen natives.

Green-Blooded Hobgoblin: He steps in front of a killer plant to save Kirk, but fortunately, his blood is less affected by the poison. He walks slap-bang into Vaal's forcefield, and later gets zapped by lightning.. He is far more accepting of an alien way of life than Kirk or McCoy, pointing out that they are healthy and happy. He gets embarrassed talking about sex, which isn't very logical.

The Real McCoy: Naturally, he is opposed to Spock's view, and takes offense at a humanoid society being held as slaves, as he sees them, without any social progress.

Alien life forms: The Vaalians/People of Vaal: Standard superstitious savages, played by white guys blacked-up (well, oranged-up) in skimpy clothes and face paint. They worship Vaal as a god, which is pretty reasonable, as he controls their entire world. Sex is forbidden and their are no children, since Vaal keeps the people alive and young indefinitely. 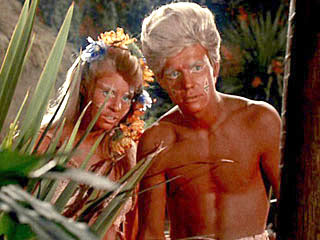 Killer Computer: Vaal, a super-powerful machine housed beneath the surface, accessed via a dragon's head carved into the rock. It has access to formidable planetary defences, controlling the weather and affecting the Enterprise in orbit. It needs to eat, for some reason. Vaal is able to drain the antimatter pods of the Enterprise, and inhibits the transporters. (“We can't beam up a fly!” Probably a good thing, that, we know what happens when you teleport flies.)

Sexy Trek: Yeoman Landon is there purely to be Chekov's girl for the week, introducing sex back into the world of Vaal. Onlooking Vaalians are immediatley moved to start trying out the Earth thing called kissing.

Cliche Count: “He's dead, Jim!” All four male redshirts get killed. Akuta actually says “What is love?” Chekov comes out with another bit of pro-Russian absurdity, claiming that the Garden of Eden was located just outside of Moscow. (Nonsense, it was in Brentford.)

The Alternative Factor: Cupcake, the burly guard in the new Star Trek movies, is apparently the alternative universe version of Hendorff, the redshirt who gets killed by the killer flower at the beginning of the episode. 'The Redshirt's Tale' comic story is the alternative version of this story.

The Vedict: Passable fluff for the first fifteen minutes, but once Akuta shows up, it dips into dreary, mildly offensive “white man's burden” stuff. I'm with Spock on this one: these people were pefectly happy and weren't hurting anyone until Starfleet interfered. If the dozen or so of them are the only population on the planet, as it looks, they're not going to last long before inbreeding takes its toll.

2.06) The Doomsday Machine
or
Captain Kirk vs. Commodore Decker

The Mission: Stop a machine that is threatening all life in the galaxy.

Planets visited: None, for good reason: all but two planets in the sector have been destroyed by the Doomsday Machine.

Stellar Cartography: The Machine's path has taken it through star system's L-370 and L-374, and into the most populous region of the galaxy. Rigel, with a population in the many millions, is next in line.

Alien Treknology: The Doomsday Machine, or Planet Killer, is an ancient device of unknown origin, possibly from another galaxy. It's a gigantic robotic weapon, miles long, with an impenetrable hull of solid neutronium, and a huge, burning maw. It carves up planets with a beam of pure antiprotons, draws the rubble into its mouth and uses it for fuel; essentially, it eats planets.

Captain James T: Torn between his friendship and respect for Commodore Decker, and his realisation that the Commodore is clearly disturbed. He's practical enough to join in the repairs on the Constellation. He's also willing to take full authority for any insubordination against Decker in order to get his own ship out of harm's way.

Crazy Commodore: A respected officer of the fleet, Commodore Matthew Decker is the commander of the USS Constellation and Kirk's direct superior. He's never lost a ship before now. Faced with no way to fight the Planet Killer, he beamed his crew down to the third planet of L-374, ready to go down with his ship, only to listen helplessly as the planet was destroyed with his people on it. His guilt over this decision has broken him, leaving him with a suicidal vendetta against the Machine.

Green-Blooded Hobgoblin: He claims that Vulcans never bluff (a bit like they supposedly never lie). He's far more bound by regulations than either Kirk or Bones, but his loyalty to his captain – and Decker's evident psychological problems – convince him to take command.

The Real McCoy: Unsurprisingly, the least regulation-bound of the three core crew, but anable to support his claim that Decker should be removed from command on medical grounds since he has been unable to formally examine him. By now, it's looking clear that his sparring with Spock is a useful way for them both to let off some steam in stressful situations.

Cliche Count: “I'm a doctor, not a mechanic!” This is Trek's first go at a Moby Dick story, but far from its last. It's the second episode in a row involving an ancient alien robot of unknown origin (for all we know, the same people built both Vaal and the Planet Killer; after all, they're both destructive alien machines that need to eat).

Links: Matt Decker is the father of Will Decker, Kirk's scheduled replacement as captain of the Enterprise in The Motion Picture.

Remastery: This is one of the episodes that benefits the most from the remastering proess, making the devastation reaped by the Planet Killer all the more frightening and immediate.

The Alternative Factor: Other Doomsday Machines have turned up in the expanded universe media. Peter David's rather excellent TNG novel Vendetta suggests that they were created to fight the Borg. His follow-up, Before Dishonor, had the original machine taken out of mothballs to fight a Borg super-cube. A Star Trek: Voyager comic named 'Planet Killer' saw the ship fight another such machine in the Delta Quadrant, and Star Trek Online includes a storyline in which the Klingons attempt to use one against the Federation.

The Verdict: One of the very best episodes of Star Trek. While the franchise will do the Moby Dick thing several times again, this is one of the best uses of the vendetta storyline, and the most understandable. Both Shatner and William Windom, as Kirk and Decker, are excellent as increasingly desperate men in a hopeless situation. The fac tthat this is basically a bottle episode means that there is more beudget for a larger cast, making the Enteprise seem like a busy ship, throwig the ghost ship of the Constellation into sharper contrast. Decker's inevitable sacrifice is well-played and affecting, with only the padding of the transporter malfunction knocking the climax from perfection.
Posted by Daniel Tessier at 23:43