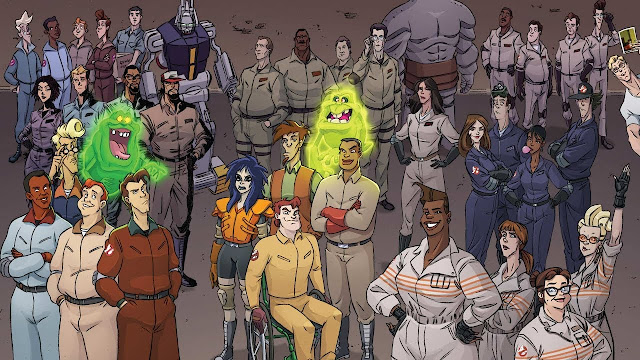 IDW's run of Ghostbusters comics began as a straightforward continuation of the original two movies and their video game follow-up. It was, from the beginning, peppered with references to The Real Ghostbusters cartoon series and toys as Easter eggs for those of us who, like main writer Erik Burnham and primary artist Dan Schoening, grew up with this nonsense and refuse to grow out of it now we're in our thirties. Over the years, however, IDW has taken full advantage of their licences to use various popular series and films, producing a number of crossovers and introducing multiple versions of the Ghostbusters into the main storyline. In 2016, the reboot Ghostbusters movie provided a new set of characters to play with, and now IDW has developed a veritable Ghostbusters multiverse. Crossing Over is the culmination of this, a sort of Crisis of Infinite 'busters.

The trade collection of Crossing Over brings together all eight issues of this comics event, along with the 2018 Ghostbusters Annual (which brought us the IDW continuity version of fan favourite RGB villain Samhain, and which I reviewed here). It involves the dream team of writer Burnham, artist Schoening and colourist Luis Antonio Delgado, who by now work so perfectly together that it's hard to imagine anyone providing a better version of the Ghostbusters in comics. The set-up is fairly simple: the “Prime Dimension” Ghostbusters have access to an interdimensional portal (provided by Donatello of the Teenage Mutant Ninja Turtles, naturally), and have used it to contact various other groups of Ghostbusters in other realities, for help in tackling particularly large paranormal threats. Not all the other 'busters are keen on their Prime counterparts' monopoly on interdimensional travel, though, and Ron Alexander (former Ghost-Smasher, now part of the Ghostbusters Chicago franchise) and Dr. Jillian Holtzmann (of Dimension 80-C, aka the 2016 movie-verse) team up to make their own.

Predictably, this doesn't work as planned, and an unlucky confluence of events leads to a huge swathe of ghosts escaping the containment unit through the portal and running amok through the dimensions. The Ghostbusters have to get these ghosts back, not simply because they're out there causing untold trouble, but also because their absence has destabilised the containment unit and it could go boom. So the Prime 'busters recruit every version of themselves and other busting teams they can find, to hunt through the multiverse and recapture all those errant ectoplasmic entities.

The first thing to say about this, is that it's tremendous fun. I absolutely lapped this up, right the way through. Bringing together the original Ghostbusters, The Real Ghostbusters, Extreme Ghostbusters, version from the games, the new movie, plus new versions created just for this project – it's basically the ideal reading material for me. No guilty pleasure here, this is just outright pleasure. However, on the other hand, this is straightforward in the extreme. Crossing Over is basically a greatest hits package for the IDW Ghostbusters range, with mixed teams of 'busters heading to various universes to recapture ghosts we've seen in previous issues. Now that's fine, and it's a tried and tested way of celebrating a milestone, like ten years of IDW Ghostbusters comics, and they deserve to run it. But there's not a great deal to this story, beyond the fun of seeing these characters mixed up together in unexpected combinations. It's a 10/10 for fan enjoyment, rather less so for actual writing.

Still, does that matter? Sometimes, by fans for fans just means getting to play together, and it's fun to just get all your toys out of the box at the same time and go nuts. There are a few great new elements in here as well: I adore Mike, a huge, articulate golem who acts as a Ghostbuster in one dimension, and the distinct visual styles of the different realities make the different story tracks fun to read. There's something to be said for a smaller publisher trying a major event like this, but knowing when to reign it in. When Marvel or DC run an event, especially one that crosses realities, it involves hundreds of issues across dozens of title. This is just a longer than average run of the main Ghostbusters series, and aside from its brief set-up in the annual, doesn't require any extra purchases. It's all collected here in one volume anyway, along with most of the variant covers, which showcase some fantastic artists (I particularly like Tim Lattie's style). Holtzmann appears on a whole lot of these extra covers; indeed, she's in the book about as much as is possible without it becoming “The Adventures of Holtzmann,” but there's a little more depth added to her character. The same can be said for Garrett, who was always the most annoying character from Extreme Ghostbusters, but benefits from some character exploration here.

The story ends in a well-deserved climax as the 'busters finally take down an especially powerful demon from a previous adventure. Winston gets some closure, while other characters are forced to make sacrifices. It's all pretty predictable, plot-wise, but it works. I'd have liked to have seen some more versions of the teams, even if only in glimpses; there are several versions of the original team, Egon in particular, but there's a missed opportunity for alternative versions of the 2016 team, for instance. That's a small quibble, though, and the run leaves off on an interesting note that promises changes when the series returns to the stands. Next we have the Ghostbusters 35th anniversary celebration, which consists of one-shot issues with different teams, which should be a fun interlude to tide us over. Next year, of course, a brand new film is due to hit, which leaves the future of IDW's licence in question. I hope they get to keep it, and look forward to seeing what new developments they have to take incorporate into their story.