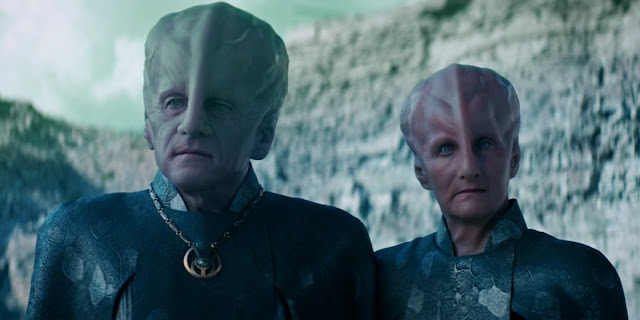 Now that was just lovely. Opening with a montage of scenes from “The Cage,” the very first episode of Star Trek recorded, “If Memory Serves” embraces the history of the franchise while molding it to its own vision. Star Trek frequently references its own past, but has rarely incorporated past footage like this. The only time something similar has happened is during the thirtieth anniversary celebration – itself over twenty years ago now – when footage from the original series was incorporated into Deep Space Nine and scenes from Star Trek VI recreated for Voyager. In that case, though, the material was treated with reverence, with the creators going to effort to make sure everything fit with the original look of the show.

“If Memory Serves” is different. The clips from “The Cage” are shown in a highly stylised, almost storybook fashion, highlighting and celebrating the visual and stylistic differences between the original series and Discovery. This is more like Doctor Who's method of celebrating its past, when clips of William Hartnell were used in both the twentieth anniversary special and the 2017 Christmas special, before brazenly introducing a new actor playing the first Doctor, with a new interpretation of the character. It's a way of saying, “This isn't the same show it was back in the 60s, but we love that original take and we're indebted to it. Let's celebrate it, and pay tribute to it.” And that's rather beautiful.

After all, every character from “The Cage” is played by a different actor here. Almost every actor from that original episode has died (the only survivor is Laurel Goodwin who played Yeoman Colt) and many of the Discovery cast hadn't even been born when the original was filmed. As remarkable as the resemblance between Jeffrey Hunter and Anson Mount is in some shots, it would be foolish to try to pretend that we were watching the same people. Equally, Discovery has a very different style to the original series, and even where it has paid homage to the old designs – the Enterprise uniforms, for instance, or the phaser designs – they've been a tribute rather than an recreation. Some fans don't like this, but we're watching productions made fifty years apart. Television and technology are different now – I mean, I watched this episode by streaming it onto a device smaller than the communicators the original cast used to speak to each other. If there's too much of a conflict for you, pick one style and decide that that's the way it “really” looks, and the other one is a mere TV recreation.

For all that, though, the Discovery version of Talos IV is a nigh-on perfect reproduction of the original, only shot on actual location instead of in a stuffy studio lot. Don't get me wrong, what the original crew managed with such meagre resources was remarkable, but seeing Talos like this was wonderful (you can't beat a good, old sci-fi quarry). Discovery's creators have reproduced the strange alien sounds of Talos, down to the singing plants. The Talosians themselves were a decent update of the originals, although I kind of love the old-fashioned bumheads and would take them any day over the more sophisticated make-up we see here. Nonetheless, they were a fine example of taking an old design and updating it to work with the modern series' style. However, it was a poor decision to use a fairly well-built man to play the lead Talosian. The original production used slightly-built women but dubbed over with deep male voices, which was a simple but effective way of making them appear alien. The new Talosians have obvious genders, and it just doesn't work as well.
They're still creepy bastards, though, who have little concept of consent and get off on reliving other people's visceral experiences. Michael is understandably disgusted by them, and I really like that she clearly doesn't trust Vina. Melissa George is brilliant in what was a pretty peculiar role in the first place. Her chemistry with Mount sells the attraction and connection between Vina and Pike far better than Susan Oliver and Jeffrey Hunter did (although, in fairness, theirs was a very different style of acting altogether). She's almost as creepy as the Talosians, though, and although she's upfront with Michael about how horrible their punishments can be, she's very apologetic for them. Definitely some Stockholm Syndrome there, which is no big surprise.

The big one, though, is Spock. After his introduction last week, we finally get to see Ethan Peck's take on Spock properly, as he's allowed some characterisation beyond lunatic obsession. I actually love the scene where he, still unspeaking and seemingly only partially aware of his surroundings, takes control of the shuttle and pilots it directly into the illusory black hole. However, he gets to truly show his stuff once on Talos when his mind has been reordered by the Talosians (not that I'd trust them to tinker with my brain). Peck is a very different Spock to either Nimoy or Quinto. He has an intensity and and unnerving quality to him, understandably considering his psychological trauma, but also a vulnerability. He has the drive of Nimoy's Spock and the sardonic quality of Quinto's, but he's very much his own version of the character, yet I have no problem accepting him as the “real” Spock, beard and all.

I'm of two minds about the schism between Michael and Spock, however. While our experiences in our youth do mold our adult selves, it just seems childish that Spock would be harbouring so much anger for one vicious exchange when they were kids. Supposedly Michael's actions on that fateful night on Vulcan set Spock down the path of rejecting his humanity and embracing his Vulcan side, and I can buy that. The poor kid was being forced to choose between two clashing lifestyles by his parents and a traumatic display of emotion could absolutely have been the deciding factor for him. But in essence he's been holding a grudge against Michael because she was mean to him when they were little, which is both emotional and irrational, so if he has dedicated himself to suppressing his emotions he's done a very poor job of it. He even accepts that her actions then were a logical way to protect him. Michael continues to apologise for something that she did as a child, when she's risked her life and career to save Spock after his psychotic break, and he refuses to accept her apology. I just feel Spock should be more mature than this.

What I do like is the nature of his madness. Having been in communication with the Red Angel – now unequivocably accepted as a time traveller – his sense of the passage of time has been skewed. This would be disorienting for anyone, but for Spock, who views cause and effect as the underpinning of logic, it is unbearable. We learn that the Angel has been interfering in his life directly since his childhood, directing him to save Michael when she ran away and nearly got eaten by a monster. (Hell, Vulcan is dangerous!) I'd lay a fiver on the Angel being someone we will recognise, possibly Michael herself (although that would make her life one massive paradox). Peck and Martin-Green share some strong chemistry though, and there's a hint of that in Peck's brief interaction with Mount.

Away from the Talos Star Group, events are getting tense on both the Discovery and Leland's ship, the NCIA-93. We finally get some real focus on Culber and Stamets, who are dealing poorly with the former's resurrection. It's hugely satisfying that we see that Culber's death, his survival in the mycelium, and his resurrection have had hugely traumatic consequences for him. Star Trek has a bad habit of killing characters and bringing them back, or transforming them into alien forms and back again, with virtually no physical or psychological after-effects. (In fact, the only person to die and come back with any real difficulty before was Spock.) Culber is suffering from dissociation after being, you know, killed and then put back together by mushroom people, which is quite understandable. Stamets just wants to pick things up where they left off, which is simply impossible for someone after they've been through that level of trauma. Also, Pike's not exactly being a genius here by letting Tyler roam around the ship wherever he likes, even stationing his quarters on the same deck as Culber's. Culber has to see the man who killed him every day. In fact, it's Saru who has the best understanding of Culber and Tyler's problems here – perhaps because he's gone through a major transition himself lately – letting them physically fight it out while they come to terms with each other's existence.

Wilson Cruz and Anthony Rapp are exceptionally good in their scenes together. Their break-up is heartbreaking. But my god, no wonder they started thinking about putting a counsellor onboard ship later on – both Culber and Stamets are in desperate need of help and support. Given the number of psychologically damaged individuals on the Discovery, Pike should really think about getting one assigned.

The Section 31 storyline continues, to no more or better effect than before. Mirror Georgiou continues to show that maybe she's OK if you just give her a chance, you know? Oh, hang on, she just casually dropped in how she exterminated the population of Talos IV in her own universe. I honestly don't understand how we're supposed to feel about Georgiou. Is she supposed to be an entertainingly heartless villain or on a path to redemption? I do like how the four creepy admirals defer to her over Leland – presuming they think she's the prime Georgiou, she's a decorated officer and probably has seniority over him. I don't understand how Leland is able to just give orders to Pike – his being in Intelligence doesn't mean he automatically outranks the other captain.

Sub-X-Files conspiracy stuff aside, this is a pretty damned brilliant episode. My misgivings over Spock's personality may go away considering we're going to be getting a lot more exploration of his character, and in any case, we don't need our heroes to be perfect. The episode works wonderfully as a tribute to Star Trek's beginnings and is pretty solid in its own right.

Culber: “I don't even know who I am anymore!”
Tyler: “Who do you think you're talking to?”