Well, it's been a while since I did one of these. I very rarely find the time and money for new comics these days, but when I was feeling crappy with the latest infectious agent that was doing the rounds – and neither going out nor really eating – I thought I could spare a few quid to treat myself.

I've picked up a few first issues and one-shots, some brand new, some released a month or so ago, to see what's new on the shelves. 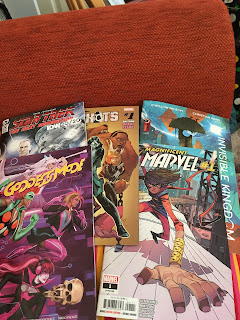 A fascinating new science fantasy series from G. Willow Wilson and Christian Ward, about a distant solar system where cut-throat economics and religious piety rub shoulders. A female-centred book – and I'm focusing on reading more of these, since they seem to offer much of the best character work in current comics – it includes space nuns (or “nones”), an alien species with four sexes, and a shipping conglomerate that delivers goods to other planets regardless of the cost to the workforce or locals. It's only the first chapter and barely scratches the surface of the setting, but it promises to be something very interesting and looks like it'll be a far better sci-fi take on Amazon than that Doctor Who episode. Think I'll carry on with this one.

Domino heads an all-female team of super-agents that reminds us that this character was a lot of fun before Deadpool 2 reinterpreted her. This is another strong comic centred on women, with as many good as bad characters, all with at least some complexity (although the newer characters don't get a lot of exploration yet). It's Gail Simone, so you know it's going to be good, and it's sensible marketing, including enough elements familiar to movie-goers to appeal (Domino, Black Widow, Wakandan rebel, anime-esque woman...) Props for remembering that Black Widow is a spy, as well. Then a male character crashes into the narrative loudly at the end, but again, he's one Simone knows how to handle properly.

Why did I stop buying Ms. Marvel? I'm fairly sure it was lack of money, but it was a hard one to let go of. This is ostensibly a new series, but it's really a continuation under a new name, as per. It doesn't matter, Kamala is as wonderful a character as ever, now a little older and wiser but still very much a teenaged girl. This combines some very fun and silly superheroics with believable friends and family dynamics, that make Kamala feel a lot more real than most superheroes. This is what Spider-Man feels like when he's written right.

Robbi Rodriguez and Rico Renzi, the artist/colourist team from Spider-Gwen, work together again, this time for DC. No surprise that this comics looks just gorgeous, with bold, frenetic artwork. The story, by Zoe Quinn, is an interesting one, but it's seriously exposition-heavy. Maybe this is just a symptom of its being a set-up issue, but for now, this AI-techno-magical future comes across as better in concept than execution. It's another interesting all-female superhero team, though, and worth picking up issue two to get to know them a little better.

Part of IDW's 20th anniversary celebrations, which appear to be hitting just in time for them to be bought up. Oh well. The idea with these is that they're taking popular series and either rewinding or fast-forwarding twenty years into the narrative. In this case, the story turns back to the 2350s, when Picard has just taken command of the USS Stargazer, with Jack Crusher as his Number One. Peter David is on writing duties, so you know it'll at least be entertainingly readable. It's pretty slight, but captures the younger Picard well – he's a bit of a dick, trying to prove himself, and recongisably halfway between the cocky cadet from “Tapestry” and the wiser elder statesman we love. And, while it's a touch fanwanky, this explores a very important meeting in his life.