“The Sound of Thunder” brings Saru's story to a climax – or at least, a climactic end of chapter – with a barnstorming adventure that raises some serious questions about the Prime Directive and just how Starfleet thinks it should be implemented. 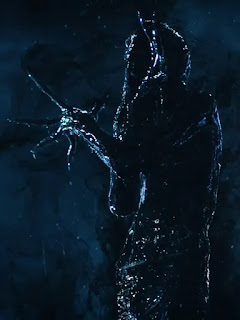 To recap: Saru had his vaharai triggered by a giant red space sphere from the dawn of time, transforming him from a meek space cow to the assertive Kelpien Mk. 2. This new Saru is more upfront, more confrontational, joyfully sarcastic and verges on being a bit of a dick. One might expect the ship's chief medical officer to prescribe a few days off to see if this unforeseen metamorphosis has any side effects, but no, Dr. Pollard sends him straight back to work. Then again, she checks out Hugh Culber, confirms that he has returned to life fully repaired to factory settings and thinks he'll be just fine to go off and deal with experiences with no further medical oversight. Pollard makes Claire from The Orville look like Hippocrates.

Saru's lost his threat ganglia, but now has some sort of “teeth” or spikes growing in their place, something we later discover can be shot like little darts. Along with massively increased strength, the new Saru has some handy superpowers, but still isn't exactly in control of himself. Saru, of course, wants to head straight for his homeworld of Kaminar, but General Order One precludes – until a signal from the Red Angel, which apparently overrides everything, leads the Discovery straight there. Pike sends Michael down – she hasn't had much opportunity to stretch her xenoanthropology muscles lately, so this is good – but she persuades him to allow Saru to accompany her. On the one hand, the one native of the planet in Starfleet is probably an essential member of that landing party, but on the other, Saru is acting seriously out of character and the last time something like this happened, he virtually committed mutiny.

There's some handy clarification on the Kaminar situation from Pike and crew: twenty years ago, the Ba'ul, the dominant life form on the planet, achieved warp and the Federation made contact. The Ba'ul were immediately hostile and the UFP elected not to contact them again. If we wanted to use this as an excuse for them not intervening in the treatment of the Kelpiens, then we're out of luck. Starfleet are fully aware that the Ba'ul are farming the Kelpiens for food, not least because Saru is there to tell them, and yet did nothing for twenty years. To stress the point: Starfleet have refused to intervene when one group of people is eating another group of people, because it's “an internal matter.” This is appalling moral cowardice, and quite simply the worst invocation of the Prime Directive in Trek's long history. No wonder Saru, having finally grown his balls, decides to break ranks and intervene himself.

It's a defining performance from Doug Jones here, as he perfectly portrays a Saru who has changed but is still recognisable. Indeed, the lack of fear only makes Saru's inner personality stand out more, rather than changing it as such. He was always the bravest amongst his people, but was cowed by his biology. His sister Siranna, on the other hand, remains petrified of going against what she believes is the natural order. In the twenty years since Saru upped and left, their father has been eaten and Siranna has become a priest in his stead. Even though she saw Saru's escape, she'd prefer to believe he was dead than question her belief system. That said, he did abandon his family without so much as a goodbye, and she does begin to come round once she is forced to confront the Ba'ul herself.

So, the Ba'ul. A masterstroke of monster design there. They are genuinely horrible creature, vaguely humanoid but with spindly, spiky limbs, and coated in a thick black oil in which they seem to live. They speak in nightmarish hissing voices. It's not often Trek does a full-on monster race, and the intention seems clear: these are the bad guys. Their ships, too, are visually impressive, vicious dagger-like designs that hang above the planet like Swords of Damocles and square up to the Discovery like a pack of wolves. On the other hand, there's the revelation that actually, the Ba'ul were originally not the predators, but the prey. It reverses the assumptions we've made, but makes it questionable to have such a character assassination of the Ba'ul. Still, there's not really any point at which we're expected to feel sorry for them, even if the Kelpiens were allegedly just as bad once upon a time.

There are some very questionable bits here. Tilly works with Airiam (the fan-favourite cyborg who remains a huge mystery, but finally gets to show what she can do with her computerised brain) to analyse data from the red sphere, which happened to be round these parts thousands of years ago when the Kelpiens were in charge. Their very rapid jumping to conclusions is a bit off, but par for the course in these kinds of shows. As usual, Star Trek throws around the word “evolve” rather haphazardly, since the Kelpiens do not evolve from one stage to another in a scientific sense, but mature through a form of minor metamorphosis. Still, the Kelpien life cycle makes no sense. Why would a predatory species have a life stage that lasts well into adulthood, that makes them completely subservient and perpetually terrified? If, on the other hand, the Ba'ul engineered them to be like this as retribution, why do they still undergo the vaharai? There's clearly something more going on here.

The Ba'ul don't take kindly to Starfleet having stolen one of their livestock, and threaten to destroy Saru's village if he does not return. In a noble show of solidarity, Pike refuses to even countenance the idea, but Saru bucks orders and beams himself back down to the planet. When he and Siranna are captured, Saru uses his new-found strength to fight back against the Ba'ul. All well and good there, even if it doesn't look like the two Kelpiens have much of a chance of escaping the Ba'ul for good. However, on the ship, Mike and Pike have a conference and decide the best course of action is to trigger the vaharai remotely using the data they got from the sphere. This only brings about a worse retribution as the Ba'ul decide to cut their losses and prepare to exterminate the entire Kelpien species with thousands of planetary weapons.

The Kelpien people are very, very lucky, because the Red Angel shows up and uses their powers to deactivate the Ba'ul's technology, saving the day and leaving the two species to learn to live together. But let's just look at what the Discovery crew do here. Finally deciding to get involved in Kaminar's situation, they inarguably break the Prime Directive, and I have absolutely no problem with this. As I've said before, straightforward morality trumps General Order One on many occasions. However, even if the Ba'ul hadn't, rather predictably, decided they were going to off the whole lot of them, Pike and crew have made a hugely presumptive decision on behalf of the Kelpiens. They have forced thousands, maybe millions, of people to undergo a transformation that is both painful and bewildering, without any attempt at gaining consent. Furthermore, they then leave the two species to sort out their differences. How do they think that is going to work? One side could very well find a way to just wipe out the other. Given the Ba'ul still have a lot of tech at their disposal, and if the Kelpiens are as dangerous as they're made out to be in their predatory forms, there's going to be a lot of conflict on Kaminar. Yet there's no indication that Discovery or Starfleet are even keeping an eye on what happens on the planet. Hell, the ship is in the system for the whole of the next episode and into the one after, yet not once is it mentioned that anyone has bothered to check up what's happening down there.

Surely, the sane thing to do would have been to inform Starfleet of the situation and petition to get involved diplomatically. Yes, that's what Starfleet should have done when they first made contact all those years ago, but still, it doesn't alter what Pike and crew are faced with now. This isn't even Kirk-style cowboy diplomacy, it's just sheer recklessness.

Not that this detracts from a very successful episode. I don't need my Starfleet heroes to be flawless, and indeed, Pike's reckless streak is addressed in the next episode. “The Sound of Thunder” is an episode based on a solid concept, with some excellent performances and some truly great design, but it absolutely demands a follow-up to show the consequences of Starfleet's actions.