Trailers for Far From Home were careful to avoid spoilers, even giving warnings about spoilers for Avengers: Endgame, from Tom "King of the Spoilers" Holland, of all people. This review, on the other hand, contains spoilers, so it's after the break. 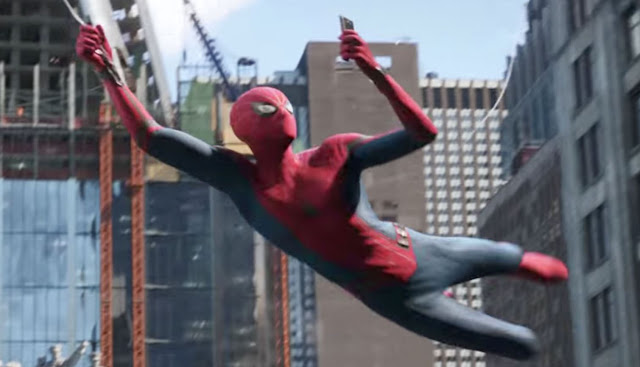 How do you follow the most climactic superhero movie in history, the culmination of eleven years of cinematic success, while both wrapping up themes from the last "phase" of said films and paving the way for the next? You focus it all back on the most down-to-earth character in the franchise and bring things back to street level. Fury rightfully points out to Peter that he's "been to space, bitch," but he's still our friendly neighbourhood Spider-Man. This split between ground-level heroics and cosmic adventures has been part of Spider-Man's story for a long time now, and Far From Home takes this as a starting point for a grand adventure. Peter goes across Europe, visiting England, Italy, Czechia and even the star's namesake nation (Tom Netherlands), but it's still back streets and tall buildings that form the arena. No, it's the split between the fight and the everyday concerns that exemplifies it. Peter battles monsters with a man apparently wielding magical powers, backed up with technology beyond most people's wildest dreams, but his focus is always on protecting his friends and hopefully, desperately, finally making something with Mary Jane.

This is the heart of why Tom Holland is so perfect in the role of Peter Parker. Aside from convincing as a high school student, he balances the brilliance of the character's scientific genius while also being very much an everyman, clueless in love and lacking in confidence. Homecoming was a John Hughes-inspired coming of age movie, and the sequel continues in this vein. A Eurotrip movie about older teens exploring their lives and the world, it's a perfect set-up for a sequel, both expanding Peter's world and Spider-Man's status as hero. While he did, of course, battle alien gods alongside the Avengers in his last two appearances, this is own film and here he proves that he can take on big hitters without Iron Man or others as back-up (Fury and Maria Hill primarily being a means to move him from one set-piece to the next, and Happy Hogan more as a surrogate link back to Tony than anything).

The split between the personal and the magnificent is tied into the film's place in the MCU. This is scant months after "the Blip," the throwaway name for the five years in which nearly four billion people were killed before being brought back (well, most of them. There's still only a brief exploration of the surely world-changing consequences of this for everyone). As luck would have it, most of Peter's class got blipped, so they're all back as they were before, although a movie where he tried to get to know an MJ or Ned who were suddenly five years his senior would have been interesting. As the hilarious opening montage shows, the Avengers are remembered with awe, especially those who didn't make it through Endgame, and Tony Stark is, in particular, a beloved figure. Yet people are more concerned with proms, trips abroad, romance and charity drives, because life goes on even after a five-year hiatus.

This juxtaposition is reflected further in Mysterio's motivation as villain. Selling himself as a super-powerful hero from another dimension, he's in reality a very petty man who's motivated by anger and inadequacy. While even casual fans of Spider-Man would have expected him to be revealed as the villain of the piece - he's been one of Spidey's rogues gallery pretty much since the beginning - it's played perfectly for those who know virtually nothing about the comics. Coming in blind, it must have looked like the baddies really were four gigantic elemental demons from beyond reality. But no, it's just some guy with a monumental chip on his shoulder.

Jake Gyllenhaal is an actor who you'd swear had already been in a comicbook movie, but somehow not. He's absolutely right as Mysterio, effortlessly charismatic (with a touch of tragedy) as the heroic Quentin Beck before turning into a vengeful man with a victim complex. It's a timely update of Mysterio's background, moving on from the special effects wizard outdone by modern techniques to a technological genius exploited by Stark Tech. While it's a more personal affront than with Victor Tooms in Homecoming, the theme of superheroes - particularly Tony Stark - pushing the regular man out of his chance at success continues. It's also hard to argue with some of the accusations Beck makes of Stark, even if he's an even bigger manbaby than his nemesis. Tony Stark was an exploitative asshole, whose genius was buoyed up by the work of a huge company. Beck, running his troupe of disgruntled ex-Stark Tech employees, is no different. In fact, if Howard Stark hand't died, you can imagine Tony going down the same route, only becoming vengefully jealous of his own father.

Tony Stark's shadow hangs heavy over the film, in spite of it being very much Peter's story. Robert Downey Jr's pitch perfect performance as Stark was the driving force behind the MCU, and now that he's gone, there's a big question as to who's going to take his place. Far From Home is clearly setting up Holland's Peter Parker as the new central figure of the MCU in Phase Four, going as far as having him echo Stark's early suit-building set piece (apparently Holland's idea, and a a pretty perfect moment in an already great film). He even gets to echo Captain America and Thor, for good measure, during the climactic battle with Beck. Of course, Peter's uncertainty about his readiness for full Avengers duty and his need for a father figure/mentor is exactly what Beck is exploiting. There are some nice touches, with cast members from earlier films showing up as ex-Stark employee, all of whom have probably got a beef with Peter, coming in from nowhere and getting the keys to the kingdom. It's not really clear why they need the EDITH tech though when they already have some serious drone technology at their disposal - are they just keen on getting EDITH removed as a threat to them before they go into the endgame?

The running thread of Peter trying to get MJ on her own and in suitably romantic circumstances is classic teen comedy material, played pretty gently here. Zendaya really impresses as this re-imagined version of MJ, still the hottest thing in school but deeply weird and awkward, and she shares a very cute chemistry with Holland. Jacob Batalon is still an absolute delight as Pete's best friend Ned, and his spontaneous (and brief) romance with Betty Brant (Angourie Rice) is ridiculously sweet. (Plus, it's good to have a fat nerdy kid on film who isn't purely there for comic relief. Ned gets to be heroic and spend time with one of the prettiest girls in the school.)

On top of some great character interplay, this is, as expected, a visual extravaganza. The battles with the four elementals (which are kind of ersatz movie versions of Hydro-Man, Sandman, Molten Man and the less-well known Cyclone) are spectacular, but the most impressive visual set piece is Mysterio's wall of illusion. It's a head-spinning sequence that is lifted straight from the comic; while Into the Spider-Verse has been the best recreation of a Spider-Man comic on the big screen yet, this sequence pushes Far From Home to a close second. As a whole, this is a worthy culmination of a long era of Marvel movies, and while it's not quite as good as Homecoming, it's still up there with the top Spidey films.

WTF moment 1: The Multiverse. Now, a lot of fans were taking the trailers for this film as final, conclusive proof that the Multiverse exists in the MCU (or maybe that should be the other way around). Now, all Mysterio's gubbins about coming from another Earth was utter rubbish - of course it was, the MCU can't be Earth-616, that's the main comics universe. But what everyone seems to be missing is that the Multiverse has been confirmed already in two films. Firstly, Doctor Strange has the Ancient One speak of it, and secondly, Endgame actually shows us multiple new realities being created. All of this together looks like a proper Multiverse story hitting in the future, and a tenner says Marvel use it to bring the X-Men in.

WTF moment 2: The Skrulls. While the final post-credits scene shows us the nice Skrulls from Captain Marvel, it's clearly seeding the idea that regular characters might not actually be who we think they are. If Nick Fury and Maria Hill can be replaced, even consensually, then any character can be replaced by force. If this isn't setting up Secret Invasion as the Phase Four arc, I'll eat my favourite hat. After all, not all the Skrulls necessarily have to be on the same side.

WTF moment 3: Spidey's identity. The mid-credits scene, which gives us that fantastic cameo by J. K. Simmons as J. Jonah Jameson, a return of the most perfect casting in any comicbook movie ever, leaves Peter reeling as his identity as Spider-Man is revealed. Now, I've no doubt that much of Mysterio's final broadcast is going to be shown to be fake news in the next film, but proving his innocence is going to be very difficult without confirming his identity. It's going to leave Peter and his loved ones in a lot of danger (interestingly, the only villainous character who already knew this was Tooms, so this removes his one remaining bit of power). While he tries to prove his innocence, Peter could find himself in a lot of trouble with the law, especially if the Sokovia Accords have been reactivated following the Blip. Spider-Man: Home Arrest, perhaps?
Posted by Daniel Tessier at 12:47