This isn't going to be a well-thought out essay or anything. It's just a collection of things that I've been fuming about on Facebook over the last few days after some time at least trying to keep my feed positive but finally giving in to the nightmare future we're careening towards.

Quick bit of background: I'm British, I live in the UK. I'm not an immigrant. A quick look at my name will tell you, though, that my ancestors were. As it happens, my genes are a mix of English, Welsh, French and traveller. I don't even know if they were Roma or Irish travellers or a mix of the two, and frankly there's bound to be other elements in my ancestry I'm not aware of. A fair number of my friends, including some of my closest, are immigrants, or the children of immigrants, from all the continents of the world. (Well, the inhabited ones. I don't know any Antarcticans.) Brighton and Mid-Sussex are pretty white, British areas, and even here there are quite a few immigrants living amongst us. And this is a good thing, in spite of the standing alone rhetoric the Brexiteers and assorted far-right parties are spouting.

Yet none of this compares to the bile that's being peddled in the United States lately. The most openly racist president in modern history is leaning heavily into outright xenophobia and race-hate, not in spite of his supporters, but because of them, because the people who support him are largely the sort of people who hate anyone brown or with a funny accent and have been dying to say it outside their homes for years. (The few non-white people who support Trump have achieved a level of cognitive dissonance I truly can't fathom, like a working-class gay man who wants Boris Johnson as Prime Minister.) 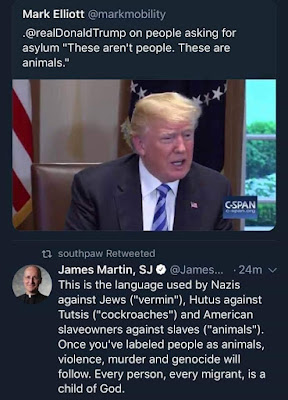 Case in point. Now, in this latest semi-coherent address, Trump was talking about immigrant gang members, who I'm sure in many cases are exactly the sort of people who should be deported. It's illustrative though, and it's a very short hop from this to calling the criminals families animals, or anyone else from their country, legally migrated or not. This, in the same week that Trump told four US congresswomen to "go home" to their "shithole countries," to crowing applause from his supporters. This, in spite of the fact that three of them - Alexandria Ocasio-Cortez, Rashida Tlaib and Ayanna Pressley - were born in the US, and the fourth, Ilhan Omar, is a naturalised citizen of the country.

Omar's treatment is perhaps the most heinous, since she came to the US as a refugee from Somalia when she was twelve. The first non-white woman elected in her state of Minnesota, and one of the first two Muslim women elected to Congress, the other being the aforementioned Ms. Tlaib. Crowds at yet another rally of Trumpites shouting "Send her home!" is positively disgusting. Yet it's exactly the sort of thing we should expect from the sort of people who gleefully voted him in. And all the while, this more sellable crime against humanity is diverting attention from his treasonous collusion with Russia and the latest evidence that he's a serial rapist.

Why so much focus on America? After all, it's not the only place where this shit is happening. The UK treats refugees like shit as well, with the notorious Yarl's Wood detainment centre being described as "hell" by the people held there. Given that the population there is overwhelmingly made of women and children, and the guards overwhelmingly male, it's depressingly unsurprising the number of accusations of sexual assault coming from there. All over the world, richer nations are dealing with refugees from poorer or more dangerous ones, and most are responding by treating them as criminals or worse. Anyone who wonders why the many people fleeing African states don't stop at Libya should how appallingly they're being treated when they make it there.

I think the reason that what's happening in the US is so intensely rage-inducing is that every single person in that country is an immigrant or from recent immigrant stock. Except for the descendants of the handful of survivors they left when they'd finished with the native population. (Ditto for Australia, who've had a real head start with this shit but have fallen out of the news lately.) The USA is, in spite of what the Republicans think, a secular nation that allows freedom of religion, which doesn't mean the freedom to discriminate against those you don't like but the freedom to worship as you wish. However, the supposedly Christian elite have somehow managed to skip the parts of the Bible where they were instructed to take in foreigners and treat them as their own. It's almost as if they don't actually care about their religion's teachings at all, just the parts that can be twisted to say they should hate those different to them. It's the shameless, screaming hypocrisy of it all.

Right now, calling immigrants "animals" isn't the biggest issue. They are being treated as worse than animals by the American and British governments. You couldn't legally keep cattle in those conditions in most developed countries. While Mike Pence calmly stands in front of cages crammed full of men, dispassionately calling the facilities a success, remember this has to be the least bad of the lot for them to have publicised it. Meanwhile, children are living and dying in squalid conditions where disease runs rampant. If you're debating whether or not something constitutes a concentration camp, you've already gone too far. The video at the top should not have become a reality between recording and broadcast.