TrekMovie.com has a full breakdown of the trailer here along with some speculation on what it all means.

Reflecting on all this, with more time to go over the details, it seems pretty clear that the Borg are a contemporary presence, rather than appearing only in flashback. This is reinforced by the fact that Hugh has been confirmed to be appearing. (He might be the Borg being operated on - not necessarily dissected - in the trailer, but it's not very clear).

It makes sense for there to be a link between Picard, Seven and Hugh, as they are the only recurring characters in the franchise to have escaped from the Borg. There are potentially, however, a lot more, especially considering that Voyager introduced a whole movement of drones who achieved individuality, and then ended with the destruction of a Borg transwarp hub and the Borg Queen. This was the last time we saw the Borg onscreen, except for the Enterprise episode "Regeneration," but that was set over 200 years earlier and featured Borg from Star Trek: First Contact (in either respect, from before the events of VGR: "Endgame).

We don't know the extent of the damage to the Borg following Voyager. The novel line and Star Trek: Online have explored the aftermath in completely different ways. Although the Queen died, she's died numerous times before and seems to simply be replaced by another, although the nature of her destruction in "Endgame" may have put paid to this.

In any case, there's nothing in the trailer to suggest that there are any Borg still active. The cube is being cut up and explored, and the Borg alcoves look like they might be in a Romulan facility. That said, I loved this detail, which suggests ate least some drones are being activated: 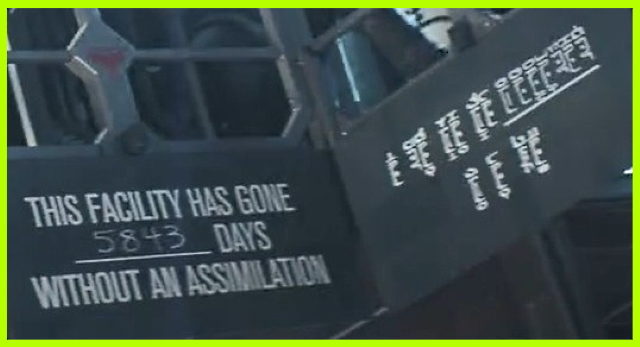 That's about sixteen years, by the way, so given the current understanding that Picard is set around 2397 to 2399, it's actually before the destruction of Romulus. Nonetheless, I'm wondering if the Romulans are trying to use Borg technology to set themselves ahead of the rest of the Alpha/Beta Quadrant powers, given that their power base in the area must be at rock bottom after their system was destroyed.

Interestingly, the IDW comic series Star Trek: Countdown, which until now has been the closest thing to a canonical look at the post-TNG period, revealed that Nero had enhanced the Narada with Borg tech, explaining how a mining ship could be so terrifyingly lethal. This had consequences in the Titan comic follow-up, but all this is outside of screen continuity and in another reality, so probably doesn't have much bearing here.

Then we have Data and/or B-4. Again, Countdown had Data as captain of the Enterprise-E after Picard's promotion to admiral, seemingly using B-4's body. This doesn't appear tenable with what we're seeing here, though. Brent Spiner's comments suggest that Data isn't fully restored, and a lot of fans have wondered if we're seeing a holodeck recreation. However, surely a holographic recreation of an AI could easily be considered an actual AI, especially if they're using Data's memories. To use a Doctor Who quote, "Different casing, same software."

A thread that was sadly not fully explored in Voyager, because it really got started just before the series ended, was the rights of holographic beings. There's no confirmation of Robert Picardo appearing as the Doctor, or indeed other versions of the EMH, but given his friendship with Seven and the AI theme that appears to be running through the trailer, I'd be unsurprised if he shows up.

So the remaining big question is Dahj, the young woman who comes to Picard for help. Based on nothing more than a hunch, I'm still convinced she's Lal, or at the very least, another android based off Soong's work. I realise she's bleeding in the trailer, but we don't know how sophisticated her appearance is now. In fact, given the research into the Borg, there's obviously a resurgence in the concept of integrating flesh and machine. Perhaps a restored Lal is a step ahead in the evolution of AI? Lal is Hindi for "beloved," although I haven't been able to find if "dahj" means anything.

Regardless of her identity, it looks like AI and cybernetic enhancement is a major theme of the series. The showrunners are obviously not worried about bringing back past characters and elements to use in Picard, and there's a lot of material from the TNG-era series for them to draw on.
Posted by Daniel Tessier at 13:44