Who Book-Quest #8: The Scarlet Empress by Paul Magrs

Paul Magrs provides a wonderful afterword to this, his first novel for the Doctor Who range, that's just as poignantly beautiful as the best parts of the story that preceded it. He talks about how, for him and his little brother, Doctor Who was always more about the books than the telly. 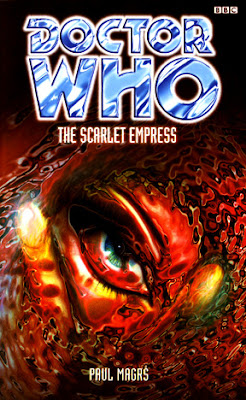 For me, coming to the series in the Wilderness Years (which must be capitalised), it was much the same. Doctor Who was, for me, books and videos. Big Finish were only just starting up, and it would be a couple of years before I would discover their audios. I didn't have a lot of spare cash, so, to begin with, I searched through the shelves of secondhand shops and libraries, looking out for tapes and battered paperbacks. Even though most of the serials had been released on VHS by that point, the long, slow publication rate meant that there rarely seemed to many about, and often it would be the same few stories that showed up, again and again. The books though, they were something else. Occasionally I'd strike lucky and find some New Adventures in a charity shop or an overflow cheapie store, but rarely, and they had a different quality, something between the Target novelisations which I was also discovering, and the new novels the BBC were publishing. The Virgin novels were, although only a few years old, evidently something of the past; the BBC books were still coming out, all the time.

My local library held a good dozen of them, and they were slowly rotated round the branches, bringing a few more in every so often. The first two I read were Lance Parkin's The Infinity Doctors, about which I rattle on elsewhere, and Chris Boucher's Last Man Running. Parkin's book was astonishingly good; Boucher's wasn't. Thankfully, I read the good one first, and cemented my burgeoning love of Doctor Who. Looking at the release schedule, Last Man Running and The Scarlet Empress must have been released together. They are each the fifteenth release of their respective ranges, Past Doctor Adventure and Eighth Doctor Adventure respectively. The EDAs definitely got the best deal that month. I returned to the library and picked up a handful more BBC novels, and Empress was among them. I opened it as soon as I got home, and within a few pages, I was captivated. 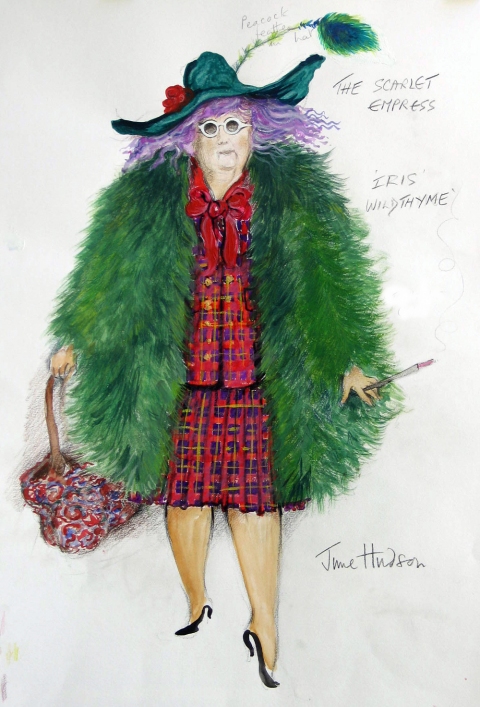 The Scarlet Empress was qualitatively different to the other Doctor Who novels I'd found. For a start, it wasn't science fiction. It was unabashedly, unashamedly fantasy. The usual Doctor Who trappings were there - he arrived on the world of Hyspero in his TARDIS, with his companion, Sam, and went on an adventure. There was talk of Time Lords, and regeneration, and Skaro and whatnot, all of which I lapped up, learning more about this peculiar universe I'd finally found my way into. Yet it was a wholly different sort of adventure to the likes of Bodysnatchers, or Vampire Science, or Legacy of the Daleks. Hyspero was a world of alligator men and bearded ladies, where cyborgs mingled with mages, where queens were pickled in jam jars and stored beneath their palace for all eternity. And most importantly, The Scarlet Empress, unlike those other books, featured Iris Wildthyme, a character as charming, adventurous and entertaining as the Doctor, only not half as serious.

Coming back to it now for my little book-a-thon must be the fifth time I've read this, I think, including the one immediately after the first, when I read it aloud to my sister. Altogether too old for bedtime stories, she still listened to me read to her, exploring my new love for Doctor Who. First I read her Doctor Who and the Pyramids of Mars, making my voice as deep as possible for the fourth Doctor's lines (which is to say, not very deep). Then Legacy of the Daleks, which wasn't amazing, but was good fun and let me scream at her in a Dalek voice, and was, as far as I was aware at the time, the sequel to the Peter Cushing movie (oh, the naivety!) Then I went in with the dense, lyrical, wonderful Empress, renewing it over and over so we'd have time to reach the end.

The Scarlet Empress was published in 1998, the first Doctor Who novel to feature Iris Wildthyme, but not the first novel - that was Marked For Life, a work in the magic realist genre that introduced a distinctly Time Lordy character who would only later cross into Doctor Who. In fact, Iris made her Who debut in the short story 'Old Flames' not long before Empress was published. This, though, was when she crashed her time-travelling bus right into the Doctor's world. A chain-smoking, hard-drinking, barmy old mare who was more than a match for the freshly regenerated eighth Doctor. A woman who claimed to have had all of the Doctor's adventures herself, and what's more, had the write-ups to prove it. It was impossible not to love her.

The Scarlet Empress itself is a beauty of a book. Flitting with ease between first and third person, it has no one core protagonist, with the Doctor, Sam and Iris sharing the limelight with Gila the alligator man, Major Angela the bearded lady, and Cassandra, the Scarlet Empress herself.  Magrs cheerfully references as many adventures in the Doctor's life as he can muster, reinforcing that this is, indeed, a Doctor Who adventure, even if it is unlike any that you have read before. That is, of course, how it should be. Once, fifty years ago, the Doctor stumbled from one genre to another, the story changing every few weeks. Only later did Doctor Who  become its own genre. And by referencing Lungbarrow, or The Dying Days, or whichever story you spot, Magrs gleefully sends up the notion of canon, for all the while, Iris is laying her own claim to the Doctor's adventures and sneering at the very idea of consistency. The sequel, The Blue Angel, would take this approach even further, but wonderful though it is, it's The Scarlet Empress that is by far the better adventure. It's a long, leisurely, meandering journey across a world of marvels and horrors, where magic is more important than logic and story is more important than truth. And it contains one of my favourite ever regeneration scenes, and if that doesn't make it top Doctor Who, I don't know what does.


The Iris image above is by June Hudson.
Posted by Daniel Tessier at 22:10