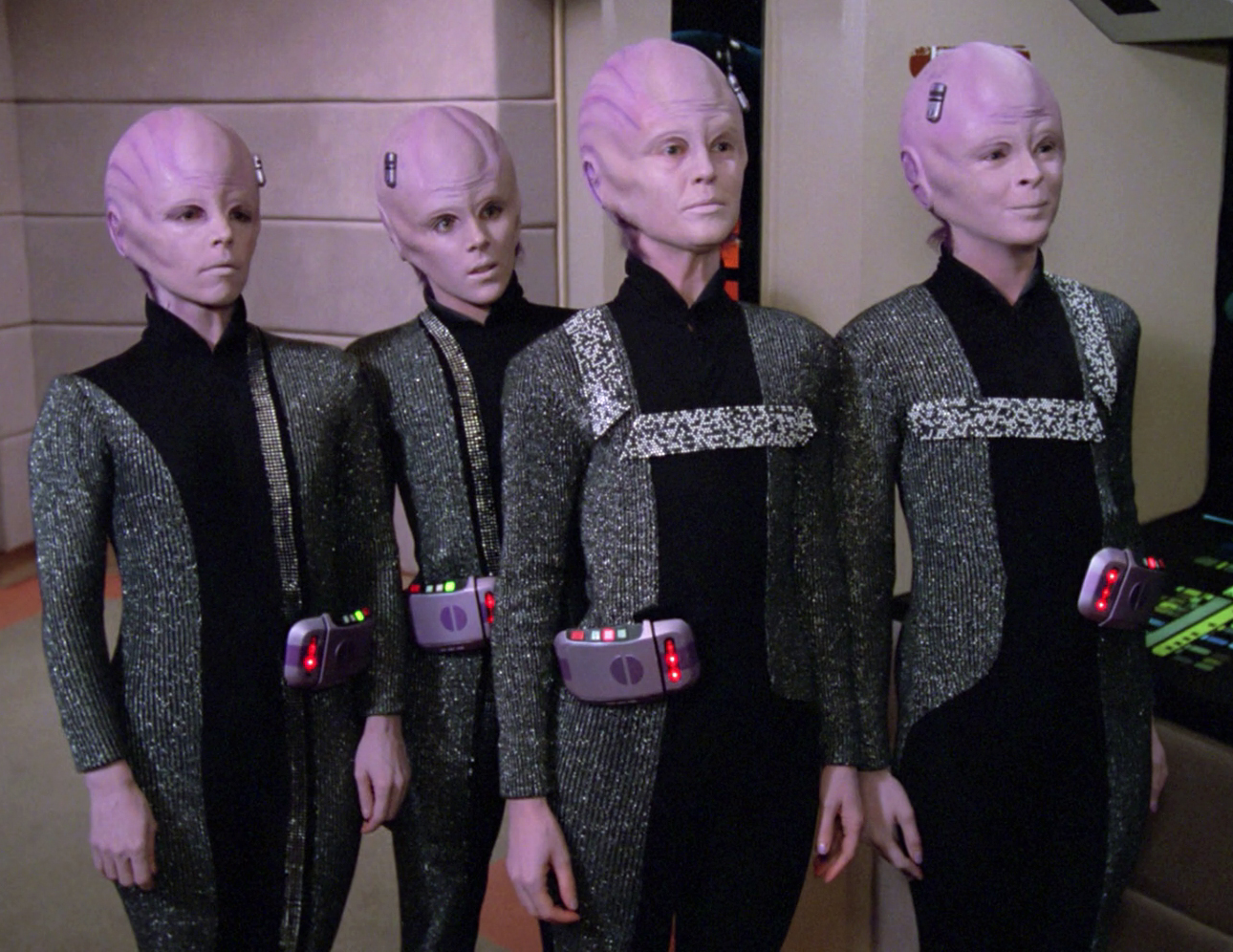 The Mission: Take back the Enterprise after it is stolen during computer maintenance at Starbase 74.

Alien Life Forms: The Bynars, diminutive humanoids with big heads and purplish skin. Like the Talosians from 'The Cage,' they are played by women but with masculine voices (downshifted rather than dubbed) to make them seem androgynous. Their ears are asymmetrical, which is fun, and each Bynar's partner has the same ears, but reversed, so they're symmetrical only in pairs. It's the same with their cybernetic head implants, which channel information from a buffer on their waists.

The Bynars are all tied in to an enormous central computer on their home planet, Bynaus, in Beta Magellan. They live and work in pairs, linked together, finishing each other's sentences, and can communicate in a high-speed digital speech. Four Bynars called 1-0, 0-1, 1-1 and 0-0 are at Starbase 74 for repair and maintenance. However, they take over the Enterprise so that they can use its computer core. The computer on Bynaus is under threat from a supernova, which will knock it out with an electromagnetic pulse. Seeing everything as in yes/no terms, they didn't ask for help in case they were refused.

Sexy Trek: In order to keep Riker and Picard distracted, the Bynars reprogramme the holodeck to create Minuet, a sexy jazz siren. Riker tries out blonde and redhead variations before he settles on the sultry brunette, played by Carolyn McCormack. Minuet is at least partly self-aware, and knows that she is a computer programme intended to captivate Riker long enough for the Bynars to take over the ship. She is far more realistic than any hologram seen so far, and Riker falls for her. She even accesses the French database so she can chat up Picard.

The Picard Maneouvre: Surprisingly affected by Minuet as well - I mean, we expect these things from Riker, but not Jean-Luc. He convinces Riker to assist him in setting the ship's self-destruct systme, before they retake the bridge. He gets to pilot the ship - a rare treat for the captain.

Number One: He loves his jazz, but thinks that blondes and jazz don't go together. He has a go on the holo-band's trombone while he's wooing Minuet. He's pretty cut up to find, after the Bynars have returned control of the computer, that Minuet has reverted to a basic hologram. The Bynars keep him aboard so that they have a back-up if they can't restart the planetary computer.

Elementary, My Dear Data: He's learning how to paint. Riker finds the idea of Geordi, a blind man, teaching an android to paint funny, but thinks it'll be in the history books someday. Takes control of evacuating the Enterprise when the Bynars fake the warp core breach. He and Geordi get everyone off the ship before elaving themselves - unaware that Riker and Picard are still in the holodeck. 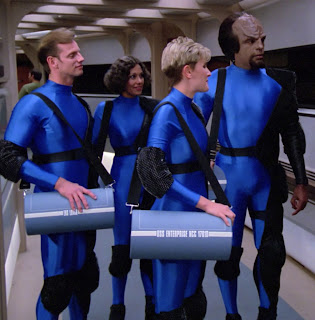 Space Bilge: The Bynars are named for the fact that they live and communicate in binary. A bit of a linguistic coincidence, isn't it? Still, no more ridiculous than with the Borg or the Cybermen, I guess. If they've only got two-digit names, then there's going to be a lot of confusion on the home planet; the four names in use here are all the combinations possible.

If there's a supernova in their star system, they've got much bigger problems than an EM pulse knocking out their computers.

Verdict: "You might have said no." This is a pretty good little episode, with a nice central sci-fi conceit. We get to see two pairs of characters work together well, showing the effectiveness of the Picard-Riker and Data-Geordi teams. The Bynars are a great idea. However, the holodeck is already feeling overused.

The Mission: Take a respected admiral to a diplomatic mission on a war-torn planet.

Planets visited: Mordan IV, a reddish world beyond the Idini Star Cluster. The inhabitants are completely humanoid; in fact they're quite possibly human, although the talk of the Prime Directive makes this less likely. The Enterprise picks Jameson and his wife up from planet Persephone V.

This Week's Admiral: Mark Jameson, played by Clayton Rohner in some of the worst ageing make-up ever committed to video. Seriously, with all the gruff old-man-acting and the layers of latex, Jameson makes the entire episode impossible to take seriously - and it really, really wants to be taken seriously. 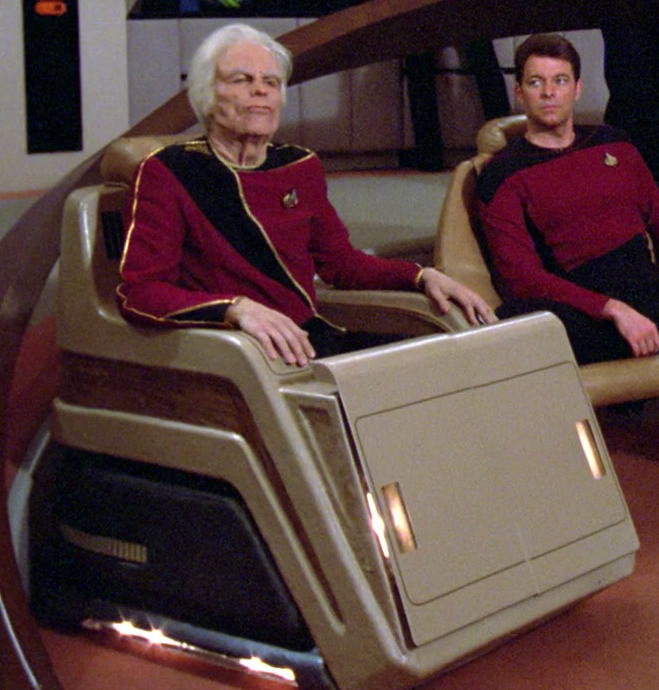 Jameson was involved with the negotiations on Mordan forty-five years earlier, and fucked it up royally. He supplied arms to Karnas, despite the guy being an obvious paranoid despot bastard, and tried to even up his violation of the Prime Directive by arming the opposing side as well. This led to the civil war, and now Karnas wants revenge.

Future Treknology: Has wheelchair technology really had no develoment over the centuries? Jameson's massive chair is almost as bad as radiation-burnt Pike's one from 'The Menagerie.' Thankfully, the people on planet Cerberus have a drug that can reverse the ageing process, so he gets out of his chair in time for negotiations - until he collapses and dies from reverse-old-age.

The Picard Maneouvre: Doesn't take kindly to having his command usurped by a superior officer, and you can tell he gets a little enjoyment out of berating the admiral for his past mistakes.

Space Bilge: So, it seems that the only reason that the anti-ageing medicine killed Jameson is that he took both doses at once, instead of taking one over a year with his wife taking the other. So, it actually works, if taken correctly. Which means that the Federation has access to an effective form of eternal youth and never uses it (which makes Insurrection an even more ridiculous film).

Sexy Trek: Jameson gets the horn for his elderly wife as his age retreats. The resulting flirting scene is not pleasant to view.

The Verdict: "The quest for youth, Number One. So futile." Talk about ramming a message home. This is a cliched and dull episode, marred by poor makeup and poorer performances.
Posted by Daniel Tessier at 21:16