WHO REVIEW: The Ice Warriors DVD 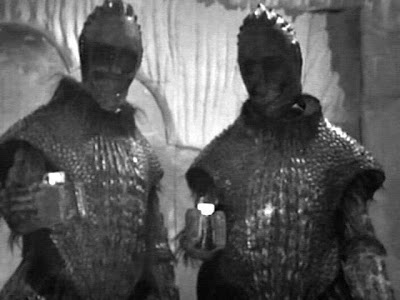 The Ice Warriors is famous for one thing, the thing it was designed for: introducing a popular new monster to Doctor Who. Unlike most attempts to create a successful reoccurring foe for the series in the sixties (I'm looking at you, Quarks) this one actually worked. The Ice Warriors returned the following year, made two appearances opposite Pertwee in the seventies, and then vanished from the screen to become one of those monsers that evryone kept trying to bring back. No one quite managed this until this year, although there were some interesting things done with the Martians in prose and comics during the intervening period. All that said... the Ice Warriors really aren't terribly interesting monsters. Effective, yes, but not interesting.

They look great, of course, in the same way that the Cybermen and the Daleks look great. Big, weird monsters from space, the sort of thing almost guaranteed to get kids to fall in love with the show.  They're essentially a redesign of the Cybermen, in fact; they're clearly cybernetic, with visors in place of eyes, mechanical-looking claws and a sonic gun grafted onto their arms. Like the Cybermen, they stand as generic monsters, there to storm the current serial's base very slowly. They're even thawed out from the ice, as the Cybermen had been a mere two serials earlier. (This is the third story in a row set in a snowy locale. Season Five is as much the tundra season as the monster season.) When it comes down to it, big green men from Mars are not an original concept. Even lizard men had become pretty cliched in sci-fi by this stage. The Ice Warriors' success has nothing to do with the idea behind them; it's purely down to an appealling design. However, it's a design that works well enough to have secured them a somewhat iconic status in the ranks of Doctor Who's many monsters.

What's peculiar is that the hulking tortoises we see are clearly not what was intended in Brian Hayles's script. When Arden and his colleagues discover Varga in the ice, they describe him as a prehistoric man, and clearly "pre-Viking." Even through the polystyrene snow and clear plastic ice we can see that Varga is no man, and that his armour is of a different kind entirely to a Scandinavian pillager's. The script features an ancient humanoid, someone frozen in the ice for longer than is archaeologically feasible, with the astonishing explanation being that he is, in fact, an alien visitor. What we get on screen is a Koopa Trooper on steroids, and while the change makes sense - I doubt space Vikings would have caught the kids' imaginations so well - it clashes with the dialogue. What we see is clearly very different to what the characters are seeing.

Where the serial is really interesting is in its view of the future and of the universe. Nothing dates like science fiction, and the Troughton years were particularly keen on making visits to the 21st century that look absurd to modern eyes. The Ice Warriors goes rather further, to the year 3000 or 5000, depending on how one interprets the dialogue, but is still a fascinating insight into how scientific views in 1967 led to a very different vision of the future than we might have now. That the world is embedded in its "second Ice Age" - geologically inaccurate, but good enough for a general viewer, surely - is brought about by man's own hubris. This period of the series featured a number of climate-changing devices, but in this case it is the overuse of synthetic foods that has led to the strange conditions. By wiping out all the farmland to make room for more homes, the inexorable progress of humanity has led to a vast global cooling. Of course, from a modern perspective this is ridiculous, for as we now know, the destruction of plant life will more likely lead to global warming. Nonetheless, this theory was taken seriously at the time, and the "second Ice Age" that threatens Brittanicus Base and forces people to be evacuated to Africa is a plausible threat by the understanding of the time.

Other scientific anomalies are evident in the story, such as the contention that Mars' atmosphere was predominantly nitrogen-based. Again, this was the consensus at the time, whereas measurements taken over the intervening years have proven that the red planet has a thin atmosphere composed primarily of carbon dioxide. This rather makes a mockery of the Doctor's anti-Martian weapon of ammonnium sulphate. Always the chemist, the second Doctor shows no qualms in using chemical weaponry against the aliens. Then, of course, there is the serial's attitude to computers, which comes across as staggeringly luddite today. In the future of The Ice Warriors, humanity is dictated by great master computers, which calculate all variables before issuing their advice in a staccato monotone. The growing use of computer technology in 1967 was a clear and inevitable inspiration for science fiction writers, almost all of whom completely failed to predict the nature and degree of how computers would be incorporated into our lives. The Ice Warriors is part of a very late-sixties subgenre in which human beings must learn to live their own lives away from the tyranny of computers (see pretty much every second episode of Star Trek in this period). The idea of computers as ubiquitous tools rarely seems to have occurred to anyone. Still, at least the base staff have Facetime.

It's the human element that make the story watchable. Penley and Clent are at the core of the story, both very much stock sci-fi characters - the individualist scientist and the authoritarian overseer - but are written well enough, and crucially performed well enough to go beyond this. Peter Barkworth is fantastic as Clent, his arrogant facade always a step away from cracking open. It's a masterful performance, a brittle character trying to hold it together in an increasingly desperate situation. While his interactions with Penley and the Doctor are fascinating, his defining moment comes when he applauds an underling for voulnteering for the mission, only to be told that he was drafted in. A dozen emotions cross Barkworth's face as his character struggles to maintain his in-control demeanour. It's a gorgeous moment. Penley is almost as good, a characetr that never descends into being the anarchist Clent paints him as. Having Peter Sallis play the part will inevitably cloud it for those of us brought up on Last of the Summer Wine and Wallace and Gromit animations, but Sallis is a good enough actor that this rarely crosses the mind.

Other characters are less well realised. Wendy Gifford does her best as Miss Garrett, but she's very much an ice queen character whose only interesting moments are when she loses her composure. Angus Lennie is great fun as Storr, but the character is the sort of irrational rebel that Clent fears Penley to have become. The guy is nuts, preferring to let a limb go septic instead of talk to those evil scientists. He's strewn from pure cliche. The bear brought in to threaten Penley and Jamie fares better as a character (did he ever act again?) The lead trio are as watchable as always, of course. I'm running out of ways to praise Troughton's performance, and here his chemistry with his co-stars is at its peak. Frazer Hines and Deborah Watling make one of the most gorgeous TARDIS teams ever, and, although they're both playing cardbaord versions of their characters here, they're both on fine form.

The Ice Warriors isn't the most exciting or pacy of serials. Viewers coming to it from the new series in search of the origins of the monster in Cold Blood might be disappointed. The important thing to remember is that this was designed to be watched one episode per week, something that is essential to bear in mind with early Doctor Who. Sit down and watch this and episode or two at a time, and you should be suitable entertained, but it's best not to try to get through it all in one sitting. 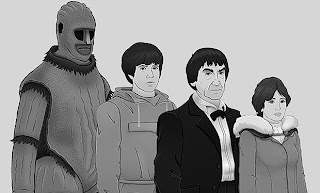 The Ice Warriors is the latest sixties release that has been brought up to scratch with visual remastering and animation taking the place of the missing episodes. The animation on the second and third episodes is brilliantly done, perhaps the best of the releases so far. Still images don't really do it justice; the slightly simpler style used here works better than the still quite effective animation on the previous release The Reign of Terror. An interesting documentary with the producers and director of the animated sections shines a light on the process, and there are some wonderfully cartoony early designs. Not something that would work slotted in between filmed episodes, but perhaps something that could be used in a fully animated story one day. They've even gone and animated the original TV trailer for the story - a very nice touch.

Other features of note include the obligatory making-of documentary, "Cold Fusion," which in this case is an entertaining piece. Hines and Watling are on good form here, as is Ice Warrior actor Sonny Caldinez. There's even a brief snatch of dialogue from the late Bernard Bresslaw, who is represented primarily by his son. Those nostalgic for the bulky VHS box set of the story released back in the nineties will enjoy the VHS links included, although they are rather surplus to requirements now, and there's a fun interview with Frazer Hines, although, frustratingly, it's the second half of one that began on The Krotons release (which i don't own). Perhaps best of all is the footage of the legendary Blue Peter "Design a Monster" competition. That ten thousand runners up got badges, out of a quarter million entries, is pretty staggering, and the three winners are rather wonderful. I think the Steel Octopus, the Aqua-Man and especially the Hypnotron are all good enough to make appearances in the series. If the Abzorbaloff can do it, why can't they?