Anyone who has read the work of Robert Rankin will know that he is a silly, silly man. He is also a very talented man, the author of dozens of novels that are best described as Far Fetched Fiction, a genre of his own invention. Among his works are the Brentford Trilogy (which runs to seven books), the Armageddon Quartet (which is a trilogy) and sundry other works too absurd to be called science fiction, too warped to be called fantasy, and too chaotic to be called comedy. He is also a talented visual artist, having in the past sculpted the bizarre entities that featured on his covers, and now illustrating covers with his unique style of line drawing. And now, finally, he has created his first fully illustrated novella.

Alice on Mars relates a far fetched tale, told to the author by his grandad, or so he claims, during his misspent youth. Many historical facts have become hidden as mere fiction, you see, the Martian invasion of Britain that was so thoroughly documented by H.G. Wells being a perfect example. Even less well known are the events of 1899, the so-called Worlds War Two, in which Alice (of Wonderland) played a major part. It is her story that is related to us by Rankin, with the aid of not only his mastery of the word processor, but also his skill with pen and ink. Each double-page gifts us with not only a segment of story in prose or verse, but also a detailed illustration.


All of the Rankin essentials are there: steampunkery, skullduggery, windbaggery, strapping young women and nefarious villains. There is the terrible Baron Voice and his sidekick and storyteller, Cheerful Charles, the sentient puppet that is the offspring of the Silver Turk and the figurehead of the Cutty Sark. It's all absolute wonderful nonsense, as usual, with added crabs and kiwis. Alice on Mars is a gorgeous piece of work, and each limited edition volume is personally signed by the master himself. 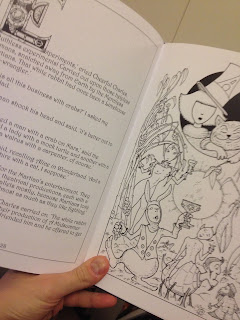 The great Rankin, along with his wife Raygun and son, Robert Rankin the Second, have set up their own imprint, Far Fetched Books, to make available e-book copies of the Rankin back catalogue, as well as these new, limited edition publications. I look forward to further volumes, for Rankin has vowed to publish one illustrated book and one full-length novel each year. The new, and last, Brentford Trilogy will begin next year with The Lord of the Ring Roads, and we even have an illustrated Rankin autobiography to look forward to, I, Robert, which I'm sure will be even harder to believe than the far fetched fiction itself. So, if you enjoy a good bit of old toot in the company of one of fiction's grandest fools, you should pop along to Rankin's Facebook page and see what all the fuss is about before Alice on Mars is sold out.