The Mission: Investigate the lost civilisation of Aldea.

Planets visited: Aldea, the fabled lost planet, located in star system Epsilon Minos. The entire planet is both shielded and cloaked, invisible to the rest of the universe. 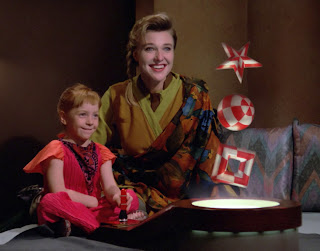 Alien life forms: The Aldeans: another alien race that look exactly like humans. They've had an advanced technological society for thousands of years, and isolated themselves from the rest of the galaxy for a life of introspection. They are, however, too dense to realise that the technology shielding their planet is destroying their ozone layer, allowing UV radiation to flood the planet. The radiation has been damaging their chromosomes, rendering the entire race sterile. There's no mention of tumours, hair loss, or diarroeah, though, so it's quite specific radiation poisoning, although it does give the big chief headaches. To prevent the extinction of their culture, they've left a trail of breadcrumbs to lead a Federation ship to Aldea so that they can trade for, or failing that, abduct some children to raise as their own.

The Picard Maneouvre: It's an episode about kids, so we get lots of Picard looking generally uncomfortable. He does give the cute little girl a hug though.

Number One: Seems very overexcited to be visiting Aldea. Outright refuses to negotiate with the Aldeans when it comes to the children.

Boy Wonder: Not a Wesley-centric episode as such, but he does become the de facto leader of the abducted kids by dint of being the oldest (and the fact that he's a genius can't hurt either). He convinces the kids to go on hunger strike. He's canny enough to learn the controls of the Custodian computer and to surruptitiously scan one of the Aldeans.

Sexy Trek: Rashella, the last person to be born on Aldea and thus the only remotely young person on the planet, is played by the beautiful Brenda Strong.

Space Bilge: Naturally, the Enterprise crew finds a way to save the Aldeans from sterility within a few days, and even sorts out the planet's atmosphere in a few moments of off-screen jiggery-pokery. The Aldeans' actions are idiotic, as are the crew's. Did the Aldeans really think kidnapping kids was going to go down well with a bunch of aliens they'd just invited to their planet? And from the humans' point of view, why is it so appalling that they want children? OK, so they obviosuly can't have the crew's kids, but surely there are at least a few orphans in the Federation, who could go to some Aldean foster families? They only seem to want about eight of them, after all, which is not a good-sized gene pool to restart a species with. 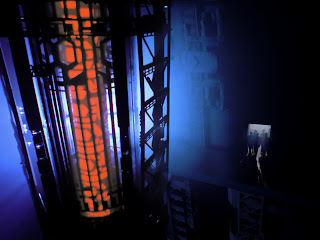 Future Treknology: As well as a planetary cloaking device, the Aldeans have advanced teleporters, the power to fling the Enterprise through space, and a supercomputer called the Custodian which controls their society - but is at least terribly polite about it. There's a shot of the Custodian's power core, towering over the humans, which is pretty cool.

Future History: The Earth suffered its own  bout of radiation flooding in the 21st century when its ozone layer was depleted.

Of course, in the original series... Kirk would have beamed down and impregnated Rashella, chromosomal damage be damned.

The Verdict: Another society run by a computer - very sixties Trek, which must have felt out of date by the late eighties, and cetainly feels archaic now. A boring, talky episode, enjoyment of which will depend on your tolerance for cute kids.

The Mission: While cataloguing the planets of the Pleiades Cluster, stop off to check on the terraforming project on Velara III.

Planets visited: Velara III is a Mars-like planet, uninhabitable by organic life, in the process of being terraformed for colonisation.

Alien Life Forms: The microbrains: tiny crystalline life forms composed of silicon and germanium and trace elements, existing in a thin layer of salt water beneath the surface of Velara III. The micro-brains are photoelectric, converting the tiny amount of light that reaches this layer into energy. The salt water allows electrical impulses to travel between individual microbrains, creating a network that produces as collective intelligence.

When the terraforming operations threatened to disturb this delicate balance and kill the brains, they first attempted communciation with the terraformers using flashes of light and vibrations, before interfacing with their computer systems. Eventually they used the terraforming laser to kill one of the scientists in self defense.

Aboard the Enterprise, the microbrains interface with the ship's systems and threatened to take control of the ship. They manage to communicate through the universal translator, and declare war on the crew (which must have at least cheered Worf up). They describe humans as "ugly giant bags of mostly water."

The Picard Maneouvre: He's quicker to accept the microbrains as alive and intelligent than most. He totally lays into Mandel, the chief terraformer, for his cover-up of the discovery, although it's not clear whether or nor Mandel truly realised they were alive. Picard eventually negotiates a peace settlement with the brains, and quarantines the planet.

Number One: Still leading the away teams as a matter of course. He comforts the biosphere designer, Louisa Kim, but doesn't get anywhere with her. Your hit rate's slipping, Riker.

Elementary, My Dear Data: He's an android ninja in this episode, dodging laser beams with ease, although we don't get to see much of his battle with the laser blaster that results in its destruction.

VISOR: There's a nice moment where Data and Geordi first observe the microbrains attempts as communication, and we get an insight into how Geordi see things. It sounds like a form of synaesthesia, as he finds the variations in the light musical.

Best line: Data: "Both those questions are matters of much discussion." I must use that when asked something I don't want to answer. 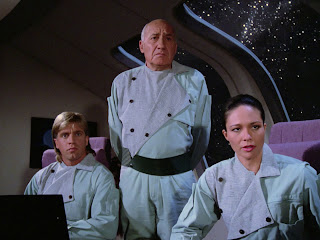 Future fashion: In the 24th century, they can terraform planets, but they still can't design a decent jumpsuit.

Future History: The Federation by now has a Terraform Command. The Enterprise crew are astonished to discover inorganic life forms, in spite of Kirk's Enterprise discovering the silicon-based Horta a hundred years earlier. It makes sense to ignore that in terms of this story, of course. (The Crystalline Entity might be silicon-based, but this hasn't been established in its recent appearance.) The microbrains recommend that the Federation doesn't contact them again for at least three hundred years, because they're too primitive.

The Verdict: A solid episode with a classic sci-fi conceit. It's another talky one, but at least there's a little action to liven things up, and the matters being discussed are interesting again. 'Ugly Bags of Mostly Water' has been a team name at the Geekest Link pub quiz more than once.

1.18) Coming of Age
or
'Captain Picard vs. Dexter Remmick'

The Mission: None, really, they're kind of between missions this week.

Planets visited: Relva 7, the location of a starbase that is hosting the Starfleet Academy entrance exams. The starbase matte painting apparently originated from Buck Rogers, which might explain why it looks so shoddy. These planets are starting to look very similar too. I'm pretty sure we've just been here.

The Picard Maneouvre: Big shock of the episode: Picard didn't pass the Academy entrance exam on the first attempt! Don't tell anyone!

He's looking forward to his old friend, Admiral Quinn, coming aboard, and isn't prepared to be shuffled off to his ready room for a private meeting. He's clearly pissed off with having Remmick snooping around the ship, questioning and generally getting in the way, but keeps his cool as Picard always does. He totally steals it when one of Wesley's peers, Jack Kurland, decides to go runaway in a stolen shuttle, talking him through a eath-defying maneouvre that saves his life. He's also very fair with the kid afterwards (we'll find out later that he could be pretty reckless as a youngster himself).

Boy Wonder: He's the youngest potential entrant to the Academy this year. He nails all the tests, but loses time when he helps out Mordock. Overall, Mordock does slightly better than him. He deals amazingly well with the rather cruel psych test, which puts him in a position of having to choose between the lives of two men, similar to the situation in which Poicard had to allow his father to die.

Number One: Being excluded from the meeting between Picard, Quinn and Remmick really gets his back up. He does his weird climbing-into-a-chair thing when he sits down with Remmick. Seriously, there's a whole video on YouTube about the way that guy sits down, and deservedly so.

Elementary, My Dear Data: Outfoxes Remmick by calmly stating the whole truth to everything.

Mr Remmick, Sir: Commander Dexter Remmick, a jobsworth officer who basically acts as a Starfleet investigator and auditor. Quinn has assigned him to go through all the records of the Enterprise and discover any incongruities. This involved him interviewing the entire crew, acting like a arrogant git and getting on the wrong side of everyone (even Data seems to be a bit annoyed with the guy). By the end of his investigation, he's become a total Picard fanboy, and asks to be considered for an Enterprise posting. He's probably an OK guy really.

Starfleet Academy: The other candidates for the Academy are a female human called Oliana Mirren, a female Vulcan named Teshanik, and Mordock, who wins the place and becomes the first Benzite in Starfleet Academy. The officer assigned to invigilate is Lt. Chang, who's played by Sam from Quincy.

Getting into the Academy is clearly much more difficult in the 24th century compared to the 23rd, which the 2009 movie would have us believe would permit anyone who turned up on a bike, hungover and covered in bruises. And do they really only have one place available?

Sexy Trek: Both Oliana and Teshanik are stunners. Oliana thinks Wesley is cute (but clearly too young for her). 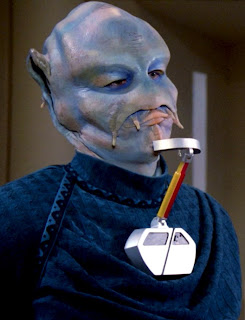 Alien Life Forms: Benzites: Tall humanoids with blue-grey skin, and unusual facial features. They have no hair, huge, flap-like ears and a fold of skin over the nose, ending in clawed tendrils. They clearly need a slightly different atmospheric mix to most species, since Mordock wears a device that emits gasses for him to breathe.

Zaldans: Powerfully built humanoids (judging by the one we see here), they look mostly human but have webbed fingers. Zaldans consider good manners and courtesy to be mere dishonesty, and prefer to be insulted.

Things to come: There's something fishy in the higher echelons of Starfleet and the Federation. We'll see where this conspiracy heads later in the season. The Romulans are also mentioned again, hinting at their greater influence to come.

Of course, in the original series... Kirk was forever dealing with officious officials, and had polite disrespect down to an art.

The Verdict: A good little episode, quiet but important in the greater scheme of the season. There are some nice nods to previous episodes, but nothing that's ever overbearing, and it makes sense that Picard would be under a lot of scrutiny as the captain of the flagship of the fleet. All the regulars get a nice moment, except for Tasha, who is largely ingored by now. It's even a good episode for Wesley.