Earlier this week, NASA announced that the space probe Voyager 1, launched back in 1977, has left the solar system and passed into interstellar space. This was first announced over a year ago, but the exact definition of interstellar space depends on where you draw the line marking the solar system's edge, so it's all a bit nebulous (not unlike the solar system itself). However, by any such definition, Voyager has passed beyond the limits of the heliopause, which is generally regarded as the edge of the inner solar system, although it's still got a long, long way to go before it passes through the Oort Cloud, so really, it's still in the bounds of the Sun's sphere of influence. Here's a handy map (it is, of course, drawn to a logarithmic scale, each increment ten times the last: 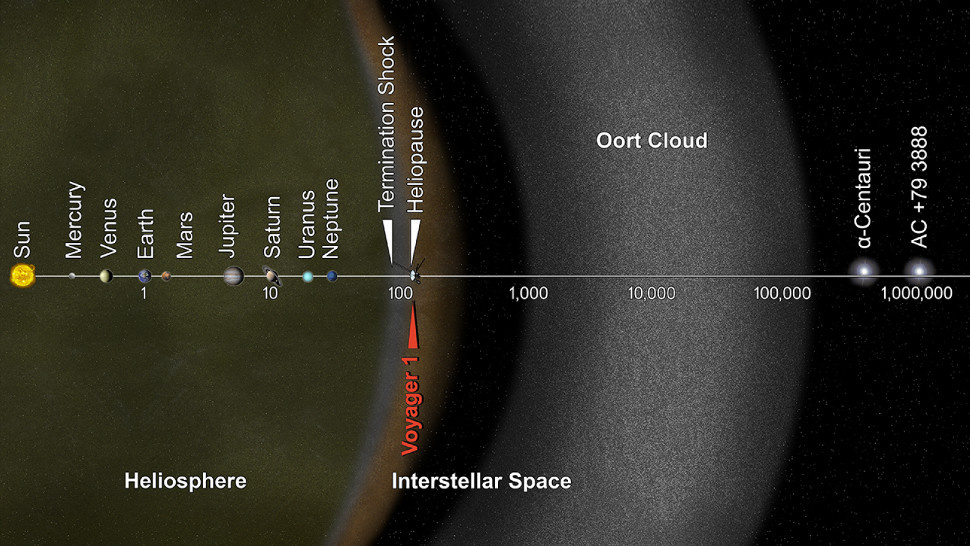 Still, it's a significant milestone. Beyond the heliopause, the Sun's influence is greatly weakened, and Voyager is essentially cruising free through the interstellar medium. It's the furthest manmade object from Earth, and it's still relaying data. It's 125 AU from the Sun, which is to say, 125 times further than the Earth is, almost eighteen light hours away. That's a long old way.

Gizmodo has a whole load of information about Voyager and its journey, including part of the audio recording that is etched onto the gold disc that accompanies the probe, (along with a record player). In the unlikely event that any intelligent entity ever finds it - space is very, very big, and Voyager is really rather small - said entity will be able to play the record and listen to a selection of everyday sounds and the best of humanity's music (or western music, at least).

Voyager 1 will keep going, and in about three centuries will finally break out of the Oort Cloud, the fuzzy swarm of cometary nuclei and planetessimals that surrounds the solar system. Then it's a mere 40,000 years or so before it brushes past the nearest star on its direction of travel, Gliese 445 (marked on the map above as AC +793888). Perhaps it will meet someone there.

But how long before it returns, hyper-intelligent and searching for its creator? Yes, I know that was Voyager 6, but there never was a Voyager 6 and the V'Ger joke is kind of obligatory.
Posted by Daniel Tessier at 11:18