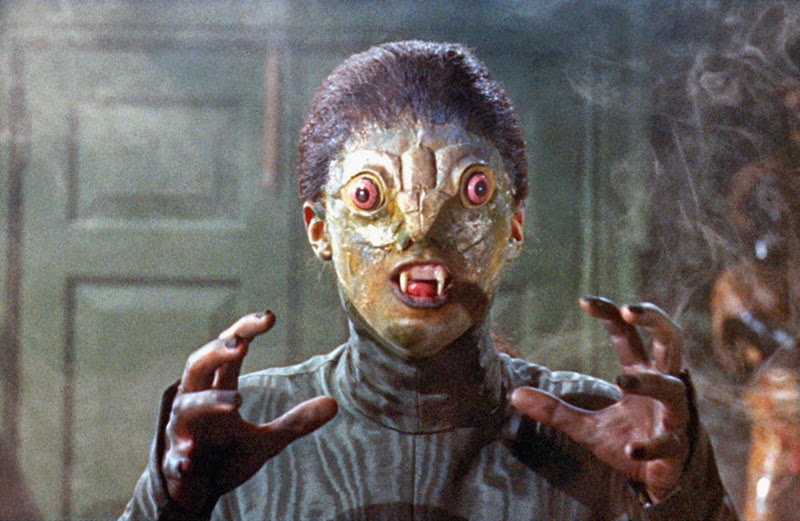 Hmmm, The Reptile... I'd expected good things from this one. It's supposedly a bit of a fan favourite. To be honest though, it was a little boring. By 1966, Hammer already had the “two strangers come to an isolated village” format down pat, but even so, this feels pretty formulaic and takes an age to get going. The Edwardian setting doesn't really add anything; this could take place at pretty much anytime with little change to the story. A great deal of the story takes place in the daytime, which is eminently sensible from a filming and logistics point of view but does rob the film of atmosphere. This is crying out to be filmed at night! The best scene is undoubtedly where the protagonist, Spalding (Ray Barrett) and his publican ally Bailey (Tom Ripper) exhume Spalding's brother from the cemetery in the middle of the night and the pissing rain. It's creepy as hell, with the sort of atmospherics that the bulk of the movie lacks.


The film only really gets going once Private Frazer – I mean, John Laurie – turns up at Mad Peter, an excitable vagrant, but they kill off this most enjoyable character quite early on. Jennifer Daniel is pretty good as Mrs Spalding, a more proactive heroine than most films of this genre tend to have, although she inevitably needs rescuing in the climactic scenes. The misguided antagonist, Dr. Franklyn – given great presence by Noel William – is a treat. Sinister at all times, he completely loses his shit with his daughter in one disturbing scene, leading Spalding to protest in the most English way possible. “I know it's not my place to interfere, but -” He's pretty useless for most of the film, even if he does man up when the Reptile bites him. Bailey from the pub is the real hero.


The Reptile itself is a great concept, but doesn't come off too well on screen. It's gimmick – a bite that injects a necrotic venom – is brilliant. The victims of the “Black Death” - more of a bluey-green death, really – die in a truly horrible fashion, their flesh putrefying as they foam at the mouth and collapse. Once we see the Reptile in all its glory though, it's disappointing. I realise the monster is an iconic Hammer image, but it's a frankly terrible make-up job, poorly designed and clearly impossible to see out of.

Jacqueline Pearce is wonderful as Anna, Dr. Franklyn's cursed daughter. She's sexual and innocent at the same time, terrified of her father yet doting on him, with an undercurrent of inappropriate attraction between them. Marne Maitland has little to do as her Malay keeper – he mostly just stands around, looking shifty and foreign. Pearce is excellent as Anna, but clearly suffering under the Reptile make-up once her character transforms. It's a shame that her experience under the make-up was so bad that it put her off this sort of role permanently.