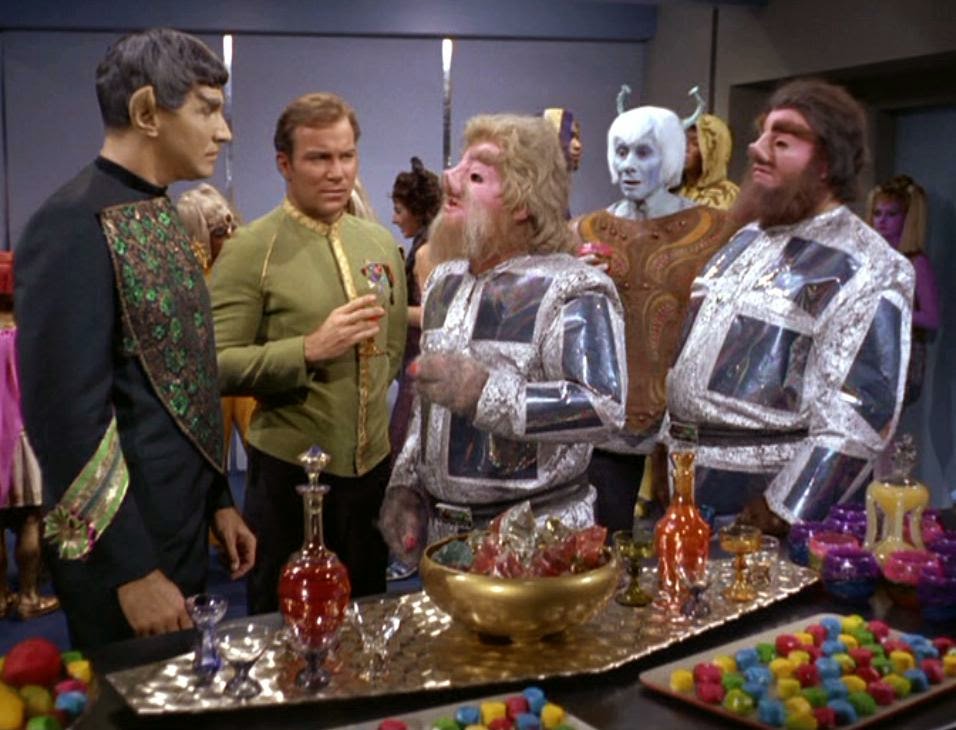 The Mission: Get Federation commissioner Nancy Hedford to Epsilon Canarais 3 to prevent a war.

Planets visited: An iron-nickel planetoid in the Gamma Canaris region, rocky and with a purple sky. It is home to only the Companion and her human lodger, Zefram Cochrane.

Stellar Cartography: The region includes an asteroid field containing more than seven thousand bodies, 30 % of which have atmospheres of classes H to M. 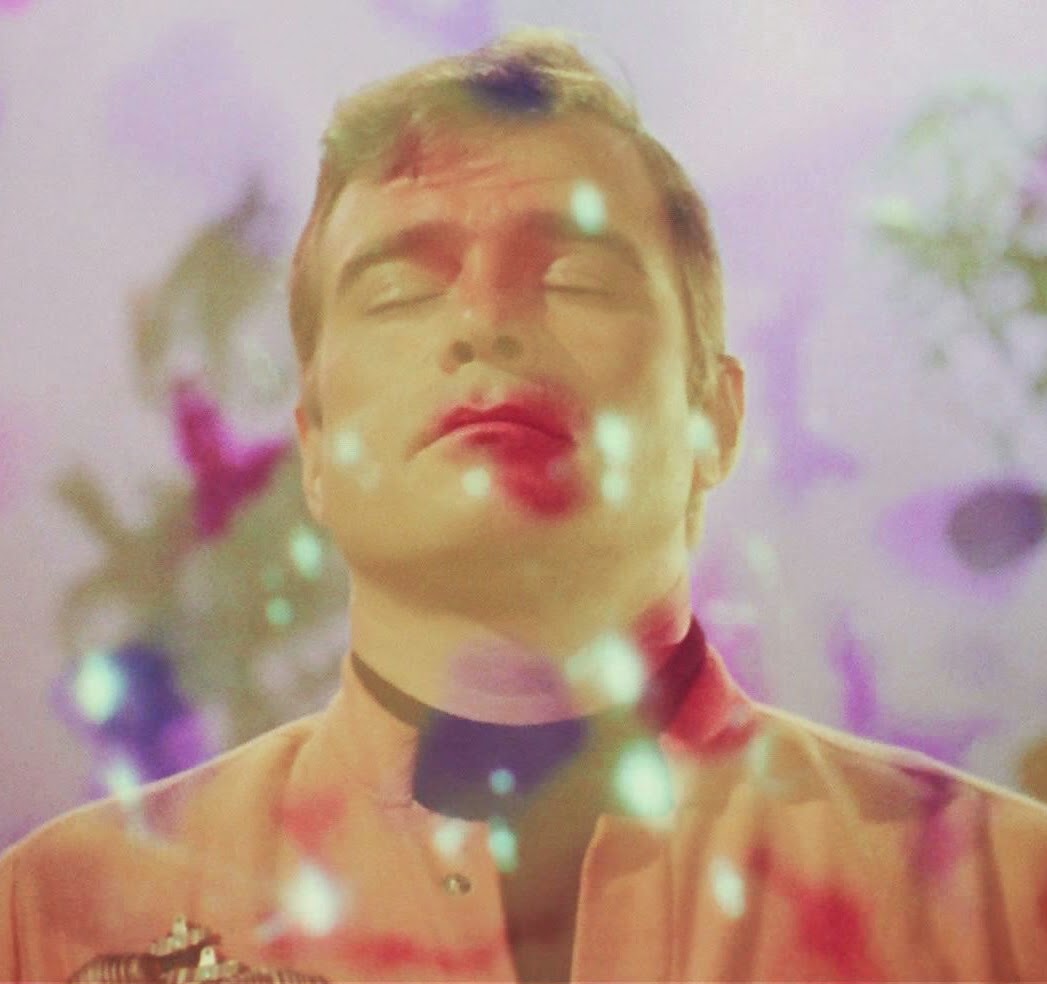 Alien life forms: The Companion – an electrical life form, composed mostly of ionised hydrogen. It's a vague, cloudy blob, and looks a bit like the transporter effect. The Companion is female, although there is no evidence of the existence of any other members of its species. The Companion is inextricably linked to its planetoid, able to travel into space at warp speed but unable to leave permanently. She's been keeping Cochrane alive for decades, and has fallen in love with him. In the end, she merges with the dying Hedford, saving her life and giving Cochrane a human companion.

Captain James T: He's explicitly a soldier, but also a diplomat. He's a good deal more patient with Commissioner Hedford than we've seen him with previous bureaucrats, even though she's even more obnoxious than anyone we've met in her profession on the series. He's troubled by, but perfectly willing, to attack the Companion if it means he can get his people off the planet. He promises to keep Cochrane's location and identity secret.

Green-Blooded Hobgoblin: Supposedly doesn't understand love, but has observed it in other life forms. He's the one who works out the Companion's nature, and also devises ways to both attack it and communicate with it.

The Real McCoy: His bedside manner is the best we've ever seen it, perhaps because he knwos that, without getting back to the Enterprise, he has no way of curing Hedford of her terminal case of Sakura's disease. He's the first to realise that the Companion is in love with Cochrane.

Warp Pioneer: Zefram Cochrane, described as Cochrane of Alpha Centauri, invented warp drive around two hundred years ago. 150 years ago, aged eighty-seven, he decided he wanted to die in space. He flew towards the unexplored regions, where he was rescued by the Companion, who rejuvenated him. He's now bored out of his brain, and the Companion brings Kirk's shuttlecraft down so he has someone to play with. He knows what Vulcans are, but isn't all that comfortable with aliens, freaking out when he learns the Companion is in love with him.

Future Treknology: The universal translator works by analysing brainwave patterns. Certain concepts are universal to all intelligent life, and the UT compares the frequencies of the brainwaves associated with these to facilitate communication. Spock is able to adapt the shuttle's UT in order to communicate with the Companion. It gives her a female voice; supposedly, the concepts of male and female are also universal concepts, which is heteronormative crap.

The Verdict: Terribly dull. Glenn Corbett gives an incredibly wooden performance as Cochrane, a character who would be totally forgettable if it wasn't for his place in Star Trek's fictional history. Hedford is the most disagreeable of the series' many disagreeable officials. It's all incredibly heteronormative. This isn't suprising – it's a sixties US programme, we were never going to get much in the way of gender exploration – but it makes the whole thing really very trite and irrelevant.

2.10) Journey to Babel
or
Captain Kirk vs. Galactic Politics

The Mission: Transport thirty-two Federation delegates to planetoid Babel, to discuss the admission of Coridan to the UFP.

Planets visited: None. The Enterprise is en route from Vulcan to the Babel planetoid.

Captain James T: One of Kirk's best and most over-the-top fights appears in this episode against the fake Andorian agent. No ripped shirt manboobs, sadly, but he leaps off the wall and gets a stabbing. He still manages to call Spock to report, before collapsing with a punctured lung. Once he's been patched up, he returns to the bridge so McCoy can operate on Spock and Sarek, staying in command until the crisis with the Orion ship is over. He plays chicken with the Orions to lure them into a vulnerable position. Hard as fucking nails.

Green-Blooded Hobgoblin: We meet Spock's parents: the Vulcan ambassador Sarek and his human wife Amanda. Spock didn't think it prudent to mention this until they were standing right in front of him. He and Sarek fell out eighteen years ago, over Spock's decision to join Starfleet instead of the Vulcan Science Academy. Spock hasn't been home in four years (at least this explains why his parents weren't at his wedding in 'Amok Time.') Spock used to have a teddy bear – a pet sehlat with six inch fangs. He risks his life providing blood for Sarek's heart operation, but puts his command first when Kirk is incapacitated.

The Real McCoy: Hates dress uniform, and isn't too keen on diplomatic conferences either. He can't do the Vulcan salute, the numpty. His operation on Sarek's heart is his first procedure on a Vulcan. He completes the operation even while the ship is under attack.

Future History: Planet Coridan is rich in dilithium but underpopulated. Admission to the Federation will bring the planet protection against illegal mining, although some members have a vested interest in retaining the status quo. It's interesting to see that the Federation is, at this stage, still full of squabbling factions with their own aims.

Vulcans: Rarely retire before their second century. Their mrtial arts include a fine method for snapping necks, even though they apparently don't approve of violence – unless there's a logical reason. Both Spock and his father have T-negative type blood. Rigelian physiology is apparently very similar to Vulcan.

Andorians: Blue-skinned people with white hair and twin antennae. By the ambassador's own admission, they are a passionate, violent people. Easily my favourite Federation aliens.

Orions: We still don't get to see a male Orion in the flesh; the spy Thelev is disguised as an Andorian (with a transmitter in his antenna, which is brilliant). The Orions have a vested interest in keeping Coridan out of the UFP, and have sent Thelev in to stir up trouble between the delegates. War is good for business, after all. The Orions have access to new starship technology that Starfleet don't recognise. They kill themselves to avoid capture.

Sundry delegates: There are all manner of Federation delegates heading to Babel, some of which might be human, or otherwise human-like aliens. The more interesting, and obviously alien ones, include some purple people, a man-woman with a beard and pigtails, and everyone's favourites, two small, copper-skinned gentlemen (Ithenites, according to background info from Enterprise).

Trek Stars: Mark Lenard, having previously appeared as the Romulan commander in 'Balance of Terror,' dons the pointed ears again for a classy perfromance as Sarek. He'll be back as Sarek in Star Trek III and The Next Generation.

The Verdict: 'Journey to Babel' is an important episode in the growing background of Star Trek, giving the Federation – which until now, might as well been the Earth Empire – some much needed exploration and colour. The introduction of Spock's parents is another major element in the development of the characters, and while 'father issues' will soon become a Trek cliche, the cast sell this well-written family feud. Add in an effective supporting cast (William O'Connel is particularly good as Thelev), some colourful costumes and some genuinely funny lines, and you've a classic episode.
Posted by Daniel Tessier at 14:47